#EndSARS: This viral photo is from an NYSC drama in Akwa Ibom, not Lekki Tollgate gun attack 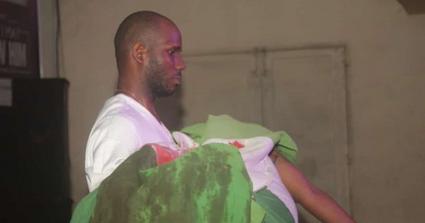 This photo has gone viral in connection to the Lekki Tollgate gun attack, but Pulse has discovered that it was not from that incident.

The viral photo of a man carrying what seems like a dead body draped in the Green-White-Green flag of Nigeria has been used to depict the Lekki Tollgate attack.

A check of the photo shows that it is not connected to the Lekki Tollgate incident.

Following the gun attack on peaceful protesters by security forces at the Lekki Tollgate on Tuesday, October 20, 2020, a photo of a man carrying what seems like a dead body draped in the green-white-green flag of Nigeria has been depicted as one of the victims.
A popular Twitter account @Tutsy22 with more than 237,000 followers was one of the persons that shared the photo with reference to the Lekki tollgate attack.

“ The flag of Nigeria was first designed in 1959.On 20th October 2020, the flag was redesigned with three vertical bands of green, RED, green. The two green stripes represent Nigeria’s natural wealth, while the RED stripe represents the death of Nigeria Youth!!!,” the account wrote while sharing a collage of photos including the photo in question.

Another Twitter user @filababi, shared the photo with the caption; ‘My cousin is dead,’.

Nigerian singer Yemi Alade shared the photo on her Twitter account @Yemialadee while reacting to news of the shocking incident.

To fact-check this depiction, Pulse did an image search which only brought links related to the Lekki tollgate incident.

Pulse also saw a claim that the photo was from an Independence Day drama by Youth Corps members from the Nigeria Christian Corpers’ Fellowship (NCCF) in Akwa Ibom on October 1, 2020.

Pulse followed up on that claim and spoke to Onyinye Francis , one of the corps members in the Drama Unit of NCCF who confirmed that the photo was from the play titled ‘Heal our Land’.

“ The lady he is carrying is not dead, it was a drama we acted on 1st of October 2020 in NCCF Akwa Ibom State themed ‘Heal our land, ” Francis told Pulse on the phone.

Pulse also saw the said photo and other photos from the play which were posted on Instagram page @afro_debbie , by one of the actors Ayomii on Monday, October 12, 2020, a week before the Lekki Tollgate incident.

The above findings prove that the viral photo of a dead person wrapped in blood-soaked Nigerian flag is not from the gun attack that happened at the Lekki Tollgate.

How we investigated Bamise’s murder – Police

Buhari off to Guinea-Bissau Wednesday