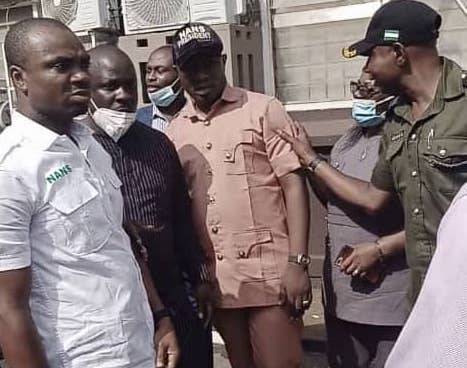 The Revolutionary President of the National Association of Nigerian Students (NANS), Comrade Sunday Asefon has stormed the University of Benin, over the suspension of the students’ union of the institution.

The students yesterday blocked the convoy of the Vice Chancellor of the University of Benin, Professor Lilian Salam over the suspension.

The institution’s Senate had suspended the executives of the students’ union body, saying it was to forestall the breakdown of law and order.

The students of the institution subsequently trooped out in their numbers to protest against the move.

The students also resisted an attempt to be evacuated from their halls of residence.

Chanting ‘No SUG! No UNIBEN! We are not going anywhere’, the students said the management wanted to use the hostel accommodations of the school to host athletes coming for the National Sports Festival holding in Benin City, the state capital on April 4.

Speaking during a visit to the institution on Tuesday, Asefon condemned the proscription of the union.

The NANS President said it was shocking that the Vice-Chancellor and management would attempt to depose a legitimate student body, rather than accommodate, or come to a compromise, on their “reasonable demands”.