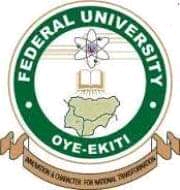 The Governing Council of Federal University Oye-Ekiti has finally sacked the university’s Registrar, Mr. Olatunbosun Odusanya over allegation of misconduct.

The decision to sack the Registrar was taken on Tuesday by the Governing Council being chaired by Dr. Mohammed Yahuza.

In a statement co-signed by the Chief Information Officer and the Special Adviser on Media Matters to the Vice-Chancellor, Foluso Ogunmodede and Wole Balogun, respectively, disclosed that Odusanya’s appointment was terminated during the Council’s meeting.

However, the institution’s Vice-Chancellor, Prof. Abayomi Sunday Fasina, has allayed the fear being entertained in the University community that following the exit of the Registar, the university would come after those he had allegedly recruited in what has now been confirmed as irregular excercise.

Specifically, Fasina said those entertaining such fear or being furnished with such rumour should perish the thought as his administration was not going to witch-hunt any member of staff.

Odusanya was on 20th April, 2021, suspended from office to pave the way for proper investigation into allegations of irregular appointment during the recruitment excercise of the University between 1st August, 2020 and 10th February, 2021.

His sack, however, was approved by the University Governing Council on Tuesday after critically looking at a report by the Council Disciplinary Committee set up to review the report of the Investigative Committee which reviewed all appointments during the said period.