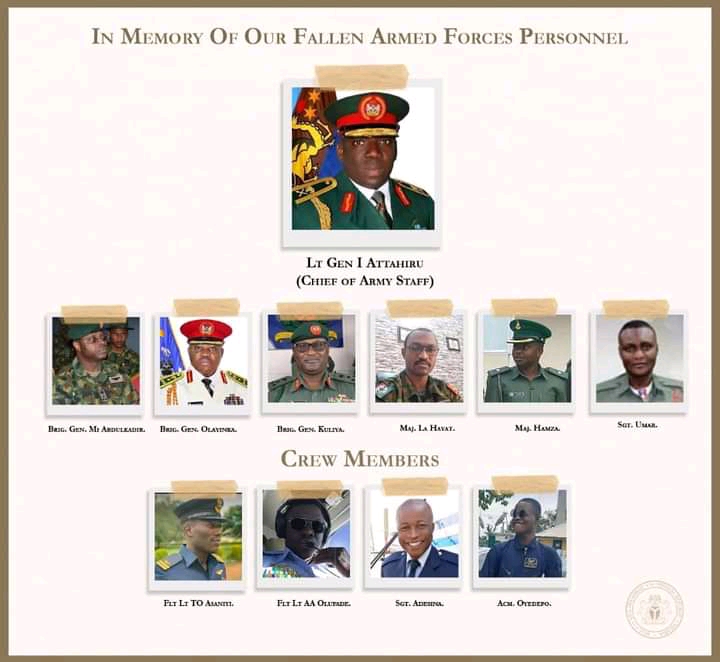 President Muhammadu Buhari has ordered that the National Flag of Nigeria be flown at half-mast for three days beginning from Monday, May 24, till Wednesday, May 26, 2021 in all public buildings and official residence across the country to honour Chief of Army Staff, Lt General Ibrahim Attahiru and 10 others who died in Kaduna plane crash.

Buhari also approved Monday, May 24, 2021 as work free day for members of the Armed Forces.

“President Buhari has directed that the national flag Flag of Nigeria be flown at half-mast in all public buildings and official residences across the country, from Mon May 24 to Wed May 26, 2021, in honour of the late COAS and other military officers who died in Friday’s plane crash.

“The President has also approved Monday May 24, 2021 as a work-free day for members of the Nigerian Armed Forces,” a statement issued by the presidency said.

Recall that 11 military officers, including the Chief of Army Staff, Lt. Gen. Ibrahim Attahiru,  died on Friday when a Beechcraft KingAir B350i billed to land at the Nigerian Air Force Base, Mando, Kaduna crashed at the Kaduna International Airport.

The death of the officers increased the number of military personnel, who died in crashes involving NAF aircraft, to 33 in six years. Also, during the period, the Nigerian military lost 11 aircraft to crashes.