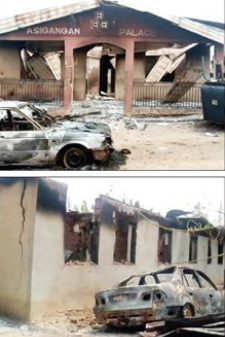 The Oyo State Police Command yesterday said 11 persons were killed during the attack on Igangan on Sunday.

The Commissioner of Police, Ngozi Onadeko, said this in a statement by Adewale Osifeso, the Police Public Relations Officer in the state.

The statement read, “In the process of the attack, 11 persons including some of the bandits were confirmed dead, while a number of vehicles and buildings including the palace of the Asigangan of Igangan town and a filling station were torched

“Intelligence and tactical apparatuses consisting of police mobile force personnel, patrol units and other tactical teams. in concert with hunters and vigilantes from the community were deployed to forestall further disintegration of law and order in the area.”

Meanwhile, the Alaafin of Oyo, Oba Lamidi Adeyemi, has described as disheartening the attack on the town.

In a statement on Sunday, he appealed to the residents of Igangan and other parts of Oyo State to be calm and allow security agencies to address the issue.

Alaafin, however, accused the police of usually freeing Fulani suspects arrested in connection with crimes.

He said, “The wanton destruction of life and property, including the palace of the Asigangan of Igangan, is quite sad.

“Despite all efforts made at curtailing this ugly menace long before it starts staring us in the face, several Fulanis have been arrested and handed over to the police in Oyo State. But there has not been any conviction not to talk of diligent prosecution as the arrested Fulanis are back on the street 24 hours after being arrested for various heinous crimes.”

Governor Seyi Makinde, while reacting to the attack in a statement, urged the people of the area to be calm.

Makinde said, “I am currently being briefed on the incidents. I urge residents to remain calm as security operatives are now in control of the situation.”

Also, the Chairman of the South-West Governors Forum and Governor of Ondo State, Mr Rotimi Akeredolu, condemned the attack, describing it as “horrendous, callous and highly provocative.”

“While we will encourage the security agencies to get to the root of this latest act of provocation, we have directed the commanders of the South West Security Network, Amotekun, to convoke a joint security meeting of all commanders in the South-West with a view to commencing joint operations in the region immediately.

“We must reiterate the fact that certain elements are bent on causing friction among the people of this country with the sole aim of achieving a pernicious end. They will stop at nothing until their set goal is realised. It is, therefore, incumbent on all lovers of peace and freedom to rise against this current regression into savagery,” he said in a statement on Sunday.

Meanwhile, the Aare Ona kakanfo of Yorubaland, Iba Gani Adams, has said the killing of residents of Igangan by suspected herdsmen has shown that war is imminent in the country.

Gani Adams added, “Information at my disposal indicates that bandits and killer herdsmen have invaded the South-West.

“All governors in the South-West should beef up the security of their respective states in order to secure the lives and properties of the people of the region.”

The Aare Ona Kakanfo lamented the alleged failure of the Federal Government to defend the people against suspected herdsmen attack, adding that people night have to begin to defend themselves

He said, “Where were re the police when the bandits started killing our people in Igangan today? Even the palace of Asigangan of Igangan land, Oba Adewuyi Olaoye, was not spared and the monarch.”

Drama as ‘celebrity kidnapper’ John Lyon, other plead not guilty to 14-count charge