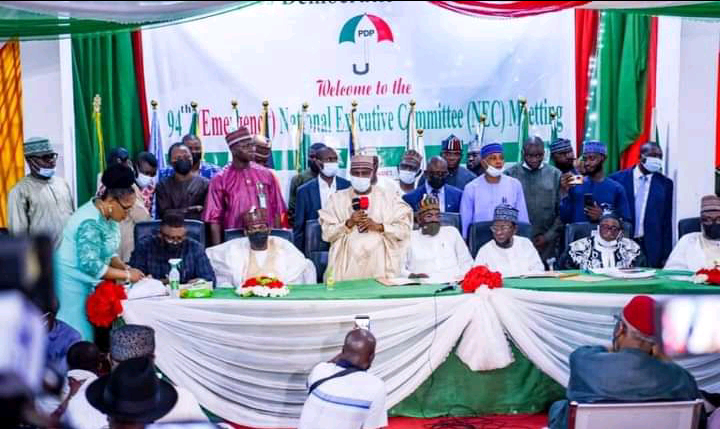 Governors elected on the platform of the Peoples Democratic Party on Thursday insisted that the national chairmanship of the party should go to the North.

This position held sway as the National Executive Committee of the PDP adopted the report of the Governor Ifeanyi Ugwuanyi-led PDP zoning committee, at its 94th NEC meeting, in Abuja, on Thursday.

The Ugwanyi committee had recommended that all party positions hitherto held by southerners should be swapped with those currently being held by northerners.

The committee in its report recommended among others that, “The current offices being held by officers in the southern zones of the country, namely, South-West, South-East and South-South zones, should swap places with the offices currently in the northern zones of Nigeria, namely, North-West, North-East and North-Central zones.”

The National Publicity Secretary of the PDP, Kola Ologbondiyan, who announced the decision of NEC, while speaking to the media after the meeting said, “NEC adopted the report of the Ifeanyi Ugwanyi’s Committee on the Zoning of offices of the National Working Committee.”

Asked whether the issue of zoning of the 2023 presidential ticket was discussed and what decision was arrived at, he said, “The issue of the Governor Bala Mohammed Committee came up and it was resolved that it should be deferred till another NEC meeting. Today’s meeting was to consider the Ugwuanyi committee report and that was what he did.”

The Governor Bala Mohammed-led Committee on the review of the 2019 general elections recommended that the contest for the presidential ticket of the party should be thrown open to all eligible party members.

It was gathered that ahead of the Thursday’s meeting, the governors first held a meeting at the Transcorp Hilton Hotel, late on Wednesday and later converged on the Rivers State Governors’ Lodge, in the early hours of Thursday.

A source privy to the meetings, who spoke on condition of anonymity for fear of retribution, said, “The governors simply came together and agreed that it was in their interest to present a common front. It was then agreed that the issue of zoning with regard to the 2023 presidential ticket as well as other elective offices should be deferred till another date to reduce tension and allow the party focus on the NWC (National Working Committee) offices and the National Convention.

“The governors reached out to party leaders across the zones, especially in the north, that the decision to zone the position of national chairman does not have an effect on executive positions such as the Presidency and National Assembly positions.”

In his address of welcome the Acting National Chairman of the party, Yemi Akinwonmi, said, “Today is a day of making history in the life and survival of the party” adding that Nigerians were eagerly waiting for PDP to take them out of the challenges of socio-political vices created by the political party in power, the APC.”

The Chairman of the PDP Governors Forum and Sokoto State Governor, Aminu Tambuwal who also spoke in a similar vein, promised that he and his colleagues would continue to support the party in its effort to rescue Nigeria.

A group of peaceful protesters had earlier gathered at the entrance of the party Secretariat to protest. They held up placards some of which read: “What did the North do to the PDP? “Stop cheating the North”, “Wike brought Sheriff? Wike brought Secondus” “PDP, give North their rights”, and” Two years of North vs 13 years of South “

The media office of the suspended National Chairman of the party, Uche Secondus released a statement shortly after the NEC meeting. The statement titled, “The blackmail mission to hijack and destroy PDP….And why Secondus is in Court,” was signed by his Media Adviser, Ike Abonyi. It read in part, “What is Secondus’ real offence? He blatantly refused to be swayed by individual ambition of a Governor that wants him to be a good boy by circumventing the rules of the party.” (PUNCH)