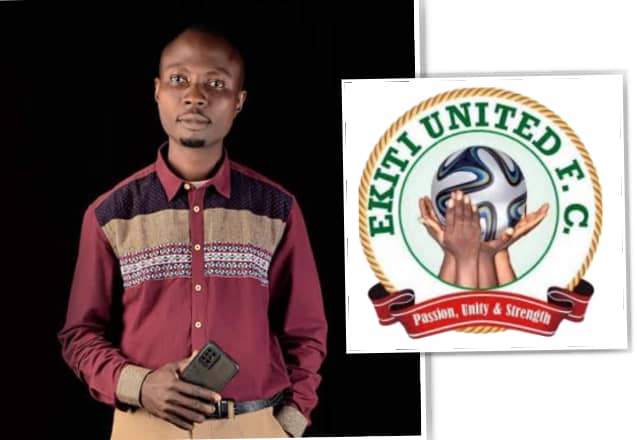 The management of Ekiti United Football Club has berated the initiators of the news in circulation on social media over some unfounded allegations against the management.

Secretary of Ekiti United, Ayodeji Olowolafe wondered why some individuals who have no proven records as football managers would see nothing laudable in the team that reached the NNL Super 8 for the first time, rather such unpatriotic persons resorted to mudslinging .

He challenged the faces behind the allegations to openly come up with proofs and facts and avoid baseless speculations aimed at discrediting the team and its management.

Olowolafe who pointed accusing fingers at the State Football Association as the brains behind the controversial media battle challenged the state football governing body to mention how it supported Ekiti United FC since the second stint of the administration of governor Kayode Fayemi began.

He stressed that Ekiti FA was only drawing more battle lines with major football and sports stakeholders in Ekiti state unlike other states where FAs join forces to build legacies urging the leadership of the association not to allow envy and desperation overshadow its sense of reasoning to applaud the achievements of Ekiti United just like every facet of Sports in Ekiti at home and abroad have done amd still doing.

The secretary of Ekiti United FC noted that the ploy of those routing for the sack of the team was only striving to take over the management once again despite leading it to relegation when they got the opportunity to manage it.

He rated the Management Board led by Mrs Funke Babalola high in the handling of the team which led to the impressive second place finish in the 2021 NNL despite the rigours and manipulations that characterize the league .

He assured that several positive changes will be brought into the team before and during the 2022 NNL with a view to making it a professional football club as it ought to be .

The Management urged the critics to eschew bitterness and support the visionary administration of governor Fayemi at repositioning Ekiti United towards ensuring another outstanding performance next season.

While welcoming criticism , the Management of Ekiti United FC urged critics to be objective and channel their grievances appropriately rather than wreckless usage of some unprofessional social media bloggers who release news without any finding as the respected journalism profession requires.