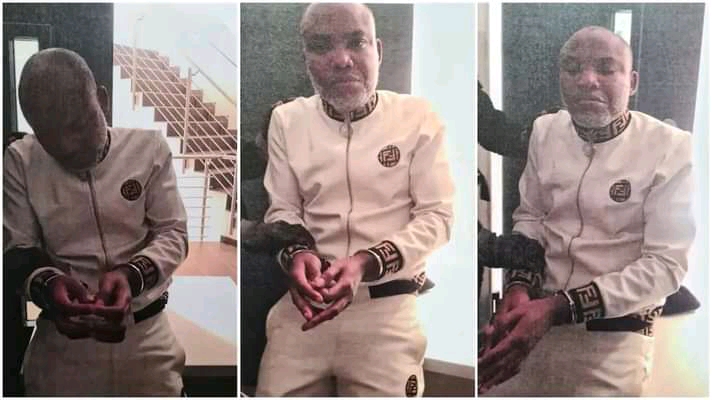 The Federal Government has amended its treason charge against the detained leader of the Indigenous People of Biafra, (IPOB), Nnamdi Kanu.

The amended charge now has seven counts as against the earlier five. The charge was filed on October 14 ahead of Thursday’s resumption of the proceedings in the case at the Federal High Court sitting in Abuja.

It was also gathered yesterday that the court has already issued a notice, reminding parties to the case about the Thursday date.

In the notice, the court asked the parties to bring forward all the evidence or document they wish to rely on in support of their arguments.

A senior official in the office of the Attorney General of the Federation (AGF) and one of Kanu’s lawyers, Maxwell Opara, confirmed the development.

The official, who did not want to be quoted because he was not permitted to speak on the matter, explained that the amended charge was necessitated by new developments.

*Count one: ”That you, Nnamdi Kanu, male adult of Afaraukwu lbeku Umahia North Local Government Area of Abia State being the leader of IPOB on diverse dates in 2014 and 2015 in London, United Kingdom, did broadcast on Radio Biafra monitored in Enugu and other areas within the jurisdiction of this honourable court, preparations made by you and others now at large. for states in the SouthEast and Southsouth and other communities in Kogi and Benue states to secede from the Federal Republic of Nigeria with a view to constituting same into the Republic of Biafra and you thereby committed an offence punishable under Section 41(c) of the Criminal Code Act, CAP. C77, Laws of the Federation of Nigeria, 2004;

*Count two:”That you, Kanu , on or about the 28th April 2015 in London, did broadcast on Radio Biafra … referred to Maj.- Gen. Muhammadu Buhari (GCON), the President and Commander-in-Chief of the Armed Forces of the Federal Republic of Nigeria as a pedophile, a terrorist, an idiot and an embodiment of evil, knowing same to be false and you thereby committed an offence contrary to Section 375 of the Criminal Code Act, Cap C. 77, Laws of the Federation of Nigeria 2004;

*Count three: That you, Kanu, had between March and April 2015 imported and kept in Ubulusiuzor, Ihiala Local Government Area of Anambra State, a radio transmitter known as TRAM 50L concealed in a container of used household which you declared as used household items and you thereby committed an offence contrary to Section 47 (2) of the Criminal Code of Act , Cap C45, Laws of the Federation of Nigeria, 2004;

*Count four: ”That you, Kanu, had between 2018 and 2021 in Radio Biafra monitored in Enugu, and FCT(Federal Capital Territory), professed to be a member of IPOB, a proscribed organisation in Nigeria and you thereby committed an offence punishable under Section 16 Terrorism Prevention Amendment Act, 2013.”