#EndSARS: Why protest is unnecessary, by Sanwo-Olu 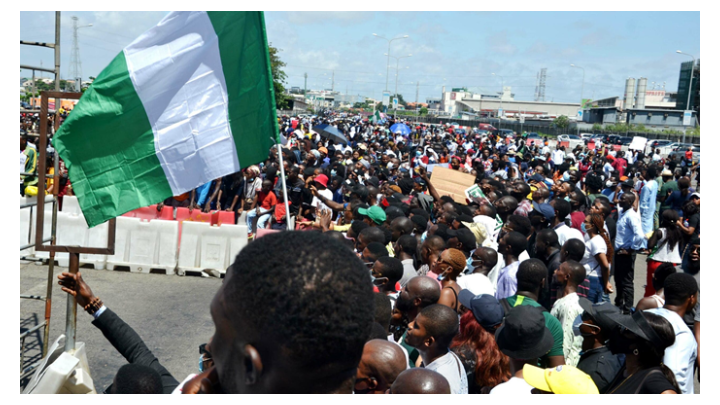 Sanwo-Olu, who acknowledged that youths have reasons to demand for better life and future, admonished them to embrace dialogue and reconciliation instead of resorting to violent attacks.

The LCCC Director-General, Dr Chinyere Almona, who lamented the impact of the #EndSARS protest on business across the country, pointed out that the business community lost over N700 billion to the protests.

Sanwo-Olu spoke at a peace conference in Lagos with the theme: Rebuilding for Greatness: ‘Peace Conflict Resolution’.

The LCCI chief spoke against the backdrops of the one-year anniversary of the #ENDSARS protest.

Also lamenting the negative impact of the protest, the Ikeja Branch of the Nigeria Bar Association (NBA) said the burnt or missing case files in court have slowed down the administration of justice.

Yesterday, the police warned against any violent protest in Lagos.

Led by Police Commissioner Hakeem Odumosu, policemen staged a show-of-force in the metropolis to reiterate their earlier warning against street protest.

Also, police, soldiers and other security agents have taken over the Lekki Toll Gate, the centre of last year’s protest.

At the Lagos Peace Conference, the state government and some youth leaders brokered reconciliation and pledge mutual commitment to conflict resolution.

Many youths across Lagos State, despite the national holiday, turned up for the conference aimed at creating a common platform for the resolution to conflicts.

The youths discussed how they could effectively channel their grievances to the authorities.

The seven-man discussion panel moderated by Mazi Sam Uche Anyamele, a filmmaker, set the tone for the governor’s response to various suggestions by youths at the event.

Sanwo-Olu, dressed in Boys Scouts’ green shirt and light-brown pants, with yellow tie to match, said “the moment for true reconciliation has begun.”

He said Lagos was now set for a total healing after last year’s coordinated attacks on its assets, which also resulted in loss of lives and livelihoods.

Sanwo-Olu stressed: “Today is a day of reconciliation and it is about our teeming youths. This is the moment to create a common ground and take ownership of our future. We have indeed assessed what we have passed through as a people; it’s now the moment to come together and build our lives together.

“This event is about aggregating all the conversations of the millions of youths that have been represented here. All of us have agreed that, when we work together, we can build a resilient society we will truly be proud of. We will continue to build, engage and work with our young people. I certainly will not give up on you as partners in progress and your ability to bring about positive changes.”

Sanwo-Olu acknowledged the need for inter-generational dialogue to proactively address issues that may lead to conflict, assuring the participants of his administration’s readiness to champion causes that would be beneficial to young people.

The governor said the youth must not only be granted a stakeholder status in the state’s project, but also be given prime seats in decisions making arena. He said his administration had shown example by appointing scores of young people under 40 years into the State Executive Council, and as political aides and administrators of Government’s agencies.

Sanwo-Olu also promised to increase the State’s investment in human capital development and equip the youths with requisite 21st century skills that would empower them economically.

He said: “I thank all the youths who participated in this forum for the valuable suggestions offered and the ideas shared. I’m taking full responsibility and ownership of all the feedback recommended here. All the points have been taken and I will continue to rely on them in the course of governance.”

Sanwo-Olu highlighted some programmes specifically targetted at youths. He said: “Some of these programmes, which were initiated as part of our efforts to address issues bothering on youth development and empowerment, include remodeling, development and equipping of four youth centres – Abesan, Lafiaji, Ikorodu and Omituntun.

“On October 27, we will be holding the first of its kind Lagos Police Youth Dialogue session where our youths and policemen will deliberate on how to strengthen their relationship and create a synergy that will improve interaction and security in the state.’’

Almona said the LCCI estimated the immediate loss from the EndSARS to be above N700 billion in October last year, with discoveries of more losses after weeks of investigations by the government across the country.

She added: “The 2021 Global Peace Index (GPI) released by the Institute for Economics and Peace ranked Nigeria 146 among 163 independent nations and territories, according to its level of peacefulness in 2020.

“Nigeria moved one step from 147 in 2020 (from 2019 rank), though it still ranked eighth among the least peaceful countries in Africa after South Sudan, Somalia, the Democratic Republic of the Congo, Libya, Central African Republic, Sudan and Mali.

“The damage it caused came with a hefty price of about 15 trillion dollars or 11.6 per cent of the world’s Gross Domestic Product.

Lamenting that the #EndSARS protests, Ikeja NBA said they resulted in loss of lives and property across the country.

He condemned the hoodlums who looted and razed the Igbosere High Court in Lagos Island.

The historic edifice was the oldest judicial building in Nigeria and rebuilding of the court complex is yet to commence.

NBA Ikeja branch chairman, Bartholomew Aguegbodo, said the effects of the #EndSARS protest was still being felt by lawyers as key stakeholders in the administration of justice system.

“There are a lot of hiccups caused by the burning of the courthouse, case files and exhibits got burnt during the #EndSARS crisis and some of those case files are yet to be recovered.

“It was just less than two months ago that alternative solutions were put in place for new courthouses in Yaba and Ikoyi areas of Lagos.

“We are still battling to grasp with the weight of the #EndSARS crisis up till now,” he said.

The NBA chairman noted that following the arson attack, several lost records could not be retrieved because online e-filing system for the judiciary had not fully taken off.

“We believe now that with the formal e-filing system working fully, if we are to have a repeat of the #EndSARS crisis, it will not generate cases of missing files any longer.

“Due to the arson attack, we had instances where both the claimants and the defendants had to bring out records from themselves to reconstruct case files.

“It created a very unhealthy task and up till today, there are a lot of case files that are yet to be reconstructed.”