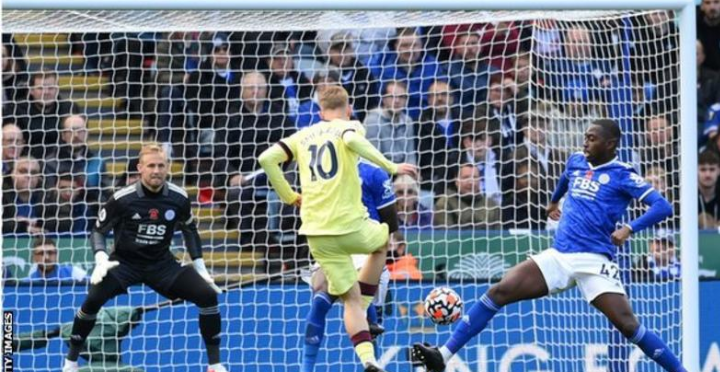 The visitors capitalised on a lacklustre start from the hosts to dominate the early exchanges and were rewarded with a two-goal lead inside 20 minutes.

Gabriel put the Gunners in front, climbing above several static Leicester defenders to head in from Bukayo Saka’s corner, while Emile Smith Rowe picked his spot when the ball broke to him after good work from Saka and Alexandre Lacazette.

They climb from 10th to fifth in the table, level on points with fourth-placed West Ham, before Saturday’s other fixtures.

It was a disappointing afternoon for Leicester who remain in mid-table.

Brendan Rodgers’ side were roared on by an enthusiastic home crowd but struggled to find the rhythm and poise that helped them to successive victories over Manchester United and Brentford.

James Maddison’s curling free-kick just before the break brought an excellent save from Ramsdale but despite a significant improvement after the break they were unable to claw themselves back into the contest.