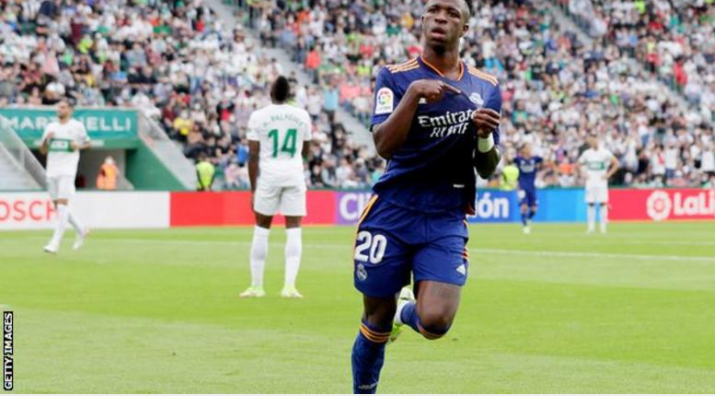 Vinicius Junior scored his sixth and seventh La Liga goals of the season to send Real Madrid back to the top of the table
Real Madrid moved top of La Liga on goal difference with a narrow victory at Elche.

Vinicius Junior opened the scoring midway through the first half, latching onto Mariano’s flick-on and sending a low finish into the corner.

Elche’s Raul Guti was sent off for a rash challenge on Toni Kroos before Vinicius doubled Real’s lead with a cool finish from Luka Modric’s pass.

Pere Milla scored late on to give Elche hope, but Real held on.

The hosts matched Carlo Ancelotti’s side – who were without injured top scorer Karim Benzema – for large spells and could have opened the scoring through Lucas Boye, but the Argentine’s shot was superbly saved by Thibaut Courtois.