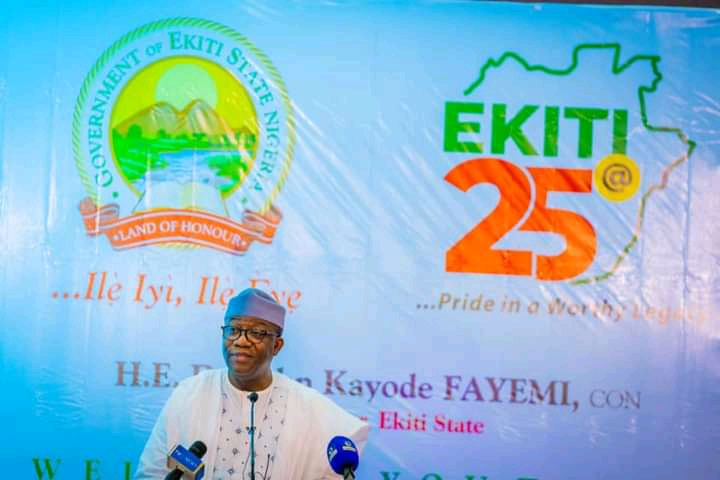 Governor Kayode Fayemi of Ekiti state on Saturday said the creation of the state was possible because of the commitment, perseverance and unity of purpose of those at the forefront of the clamour.

The governor spoke at the maiden edition of Ekiti Honours (Oni Uyi) Awards conferred on 48 distinguished Nigerians categorised as ‘Architects and Builders’ of Ekiti as part of activities to commemorate the 25th anniversary of the state.

Fayemi said the honourees included “those at the forefront of the vanguard for Ekiti State creation. We have diligently researched into our archives in a painstaking move to identify these heroes and heroines whose labour and efforts resulted in the creation of Ekiti State.

“They laboured in intellect, finance and physical exertion to get us what we have today. Our decision to honour them today is our show of gratitude to these valiant men and women.

“We may not be able to give great gifts today, but this award will put their names on the golden roll of Ekiti heroes.”

Three awardees – the Secretary to the State Government, Mr Biodun Oyebanji; Fasuan and Oba Adejugbe, who spoke on ‘Creation of Ekiti State: Going down memory lane’, told the story of the struggle for the creation of the state and how it was realised in 1996.

Fasuan said, “It all started in Ibadan in the old Western Region, where some Ekiti indigenes saw and experienced persecutions, neglect and deprivations in a aspects,” adding that the situation continued when Ondo State was created, hence the determination for a state.

Oba Adejugbe, who corroborated him, said he was barely three months on the throne when the struggle started, adding that, “Risk taking, proactiveness and good thinking brought about the dream and its realisation. These were amplified by the unity of purpose among Ekiti obas and people.”

Responding on behalf of the awardees, Dr Teniola Oluwadare, lauded Fayemi for his development strides in the state and for considering it worthy to honour distinguished sons and daughters of the state. (Punch)