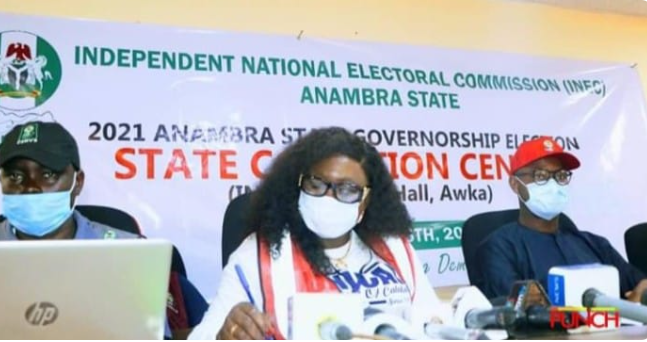 The returning officer of Orumba North LGA, Dr. Michael Otu, stunned stakeholders at the Anambra State governorship election collation centre on Sunday when he denounced the result he signed.

He said he did not believe in the result.

He accused the electoral officer that was supposed to work with him of collaborating with some people to scuttle the election results in the area.

He stated this while delivering his report to the State Returning Officer, Prof. Florence Obi, at the ongoing election result collation.

He said there was no election in the entire local government area.

He said a crisis fomented by policemen led to his signing the result under duress.

“I signed a report I didn’t believe in. I signed it under duress. I was teargassed. I was locked in the toilet, until a policeman smuggled me out.

“I could not even go out to ease myself. They were monitoring me up and down. At a point, I saw that my life waS in danger, so, I have to sign the results they prepared.

“I called out to my colleagues to tell them that I was in danger here,” he narrated.

Responding to the allegation, the electoral officer who did not give her name, accused the returning officer of not knowing anything about collating election results.

“This man here has said so many things against me. But I observed that he has no experience in collating election results.

“This man does not know his left from his right. The result is full of mutilation. He does not know the difference between conducting election and and collating results.

Prof. Florence Obi, said that she was told about the crisis in the local government area.

“This is the only local government I had a distress call from and I had to call the commissioner of police and told him that the lives of my staff are in danger,” she said.

As it is, a winner might not emerge from the election today, as there was no results declared for Orumba and Ihiala local government areas.

In the result declared at INEC LG office at Ajalli , the APGA candidate won 4826 votes to take the council. APC got 2692 votes and PDP 1,863 votes.