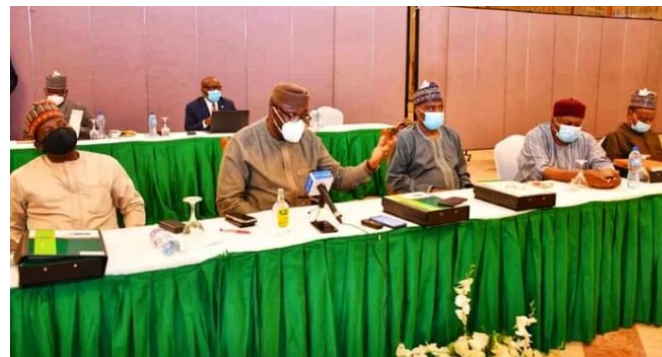 The Nigeria Governors’ Forum (NGF) has accused Abubakar Malami, attorney-general of the federation (AGF), over alleged involvement in the controversial $418 million request by consultants regarding the Paris Club refund.

The NGF said this in a statement issued by Abdulrazaque Bello-Barkindo, the forum’s head of media and public affairs.

The controversial payment of $418 million to consultants had become a contending issue between the three tiers of government.

On Friday, a federal high court in Abuja stopped the federal government from deducting $418 million from the bank accounts of the 36 states of the federation.

Bello-Barkindo said the decision of the AGF throw his weight behind the consultants who have been battling desperately to grab $418 million from the accounts of states and local governments “raises questions of propriety and the spirit of justice.”

“The attention of the Nigeria Governors’ Forum (NGF) has been drawn to a statement issued by the media aide to the Attorney General of the Federation (AGF), Umar Gwandu, on Friday 5th November 2021 published in the Nation Newspaper of same date in support of deductions of humongous state resources amounting to $418 million from the Federation Account,” the statement reads.

“The payments are made in favour of private contractors and/or consultants for alleged work done to the Paris Club Refunds to the States and Local Governments. Since the Honorable Attorney General of the Federation (HAGF) has not contradicted his aide, it is therefore deemed that the statement was issued with his authorization and consent.

“We need to state quickly that when we first read this press release, we had to double-check to be sure it was not authored by a lawyer representing either one or all the promissory notes recipients.

“The HAGF is supposed to be the chief arbiter in all matters concerning Nigerians, especially the poor masses of this country. It is incumbent upon him to, not just ensure that justice is done, but that justice is seen to have been done.

“The undue haste, with which the statement was issued even before the service on the AGF of the court processes and the order dated 5th November 2021 restraining the Federal Government, seems to suggest that there is a special relationship between the Office of the HAGF and the consultants over and above Nigerian citizens, whose interest the HAGF as the Chief Law Officer of the Federation is statutorily bound to always protect.

“The statement also suggests that the restraining order issued last Friday not only unsettled preconceived plans and angered the unnamed ‘government officers’ referred to by the media aide.”

Bello-Barkindo described Malami’s claim that he intervened to pay the contractors to avoid execution of the judgments against the federal government resources as false.

According to him, neither has the NGF provided any undertaking or indemnity to the federal government to act on its behalf as represented by the AGF.

“Let him advise the contractors to wait until all appeals and litigations in court are concluded. That is the true test of observing the rule of law. There is no other way, uncomfortable as that would appear,” the statement adds.

“State resources needed for critical development should not under any guise be frittered away as payments for contracts whose veracity and authenticity is still a subject of litigation and disputation.

“These contractors are impecunious and cannot restitute the states/LGAs if the appeals or other litigation are determined against them.

“We call on the general public to be alert and vigilant. The debt relief granted to Nigeria by the Paris Club in 2005 was meant to enable her to have a respite and use the resources saved for meaningful development.

“It was not for distribution to private persons to fund their luxurious lives; neither can Nigeria justify her borrowing funds all over the world to fund capital projects and turn round to disburse state resources to individuals in a manner that offends all public sensibilities.”