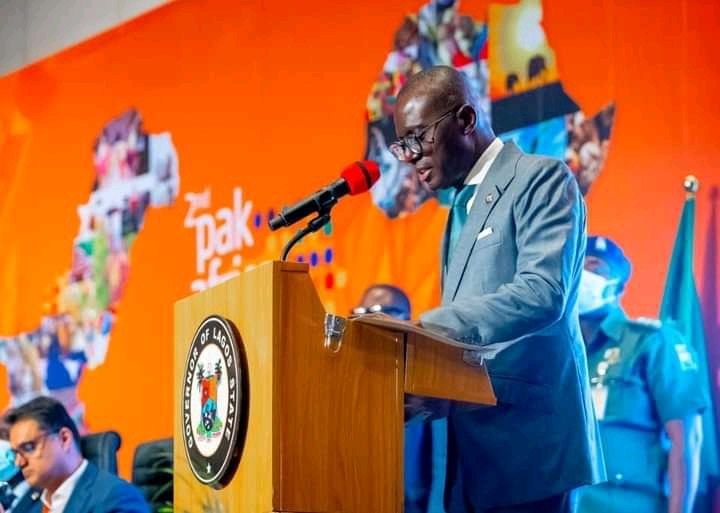 Governor Babajide Sanwo-Olu of Lagos State on Wednesday, presented the budget for year 2022 to the state House of Assembly.

The governor presented a total sum of ₦1.3 trillion to the Assembly, tagged the 2022 Budget Of Consolidation.

During the formal presentation of the budget, Sanwo-Olu said it is to consolidate the efforts of his administration for the past two years, adding the budget is significant being the last budget before 2023 election.

“Today, I stand before you to present the Year 2022 Appropriation Bill, which will be the final full-year Budget before the next elections in 2023.

“This makes it a very significant budget, which we have aptly christened the Budget of Consolidation. 2022 is a year in which we will focus obsessively on completing ongoing projects, while also expanding our social intervention programmes and support for citizens, and for micro and small businesses.

“The Y2022 Budget is aimed at consolidating all our efforts so far, into timely delivery of our electoral promises of a Greater Lagos to all citizens and residents of the State. Our destination is now in sight,” he said.

Sanwo-Olu said budgets for 2020 and 2021 ”were used to improve the standard of infrastructure in the 377 wards across the state, in alignment with his administration’s mission to eradicate poverty and promote economic growth through infrastructural renewal and development”.

“We cannot afford to rest on our oars. We are therefore using this opportunity to again announce our commitment to delivering the Lagos of our dreams: Africa’s model mega city, a global economic and financial hub that is safe, secure, and productive,” the governor said.

Speaking at the presentation, Mudasiru Obasa, the Speaker of the Lagos State House of Assembly, passed a vote of confidence on Mr Sanwo-Olu for the achievements of his administration.

“Mr Babajide Sanwo-Olu, permit me to commend your astuteness, courage, forthrightness as well as your determined spirit all geared towards a greater Lagos within the period you have been in office. No doubt, you have maintained a track record of resourceful consistency in the state,” he said.

Mr Obasa also praised the House of Assembly “for its pro-people orientation and for constantly supporting the Governor to meet the yearnings of the people of the State.”

He said “the support the governor enjoys from the Assembly had reflected in the successes so far achieved by the government”.

“This will be the last full year budget to be implemented by this administration. Expectedly, the responsibility is now on the members of this Honourable House to do the needful, by meticulously performing our constitutional duty.

“It is, however, pertinent to note that the very cordial relationship existing between this Legislative House and the Executive has not stopped us from performing our constitutionally assigned roles of exercising control over the state’s purse,” Mr Obasa said.

The speaker urged the governor to focus on projects that will alleviate poverty, empower Lagosians, and boost employment.

“I urge Mr President to work towards rejigging the economy. The federal government should at the same time work with the component units, which are the states, to further empower them to develop the natural endowment resources. This will no doubt boost the economy,” he said.