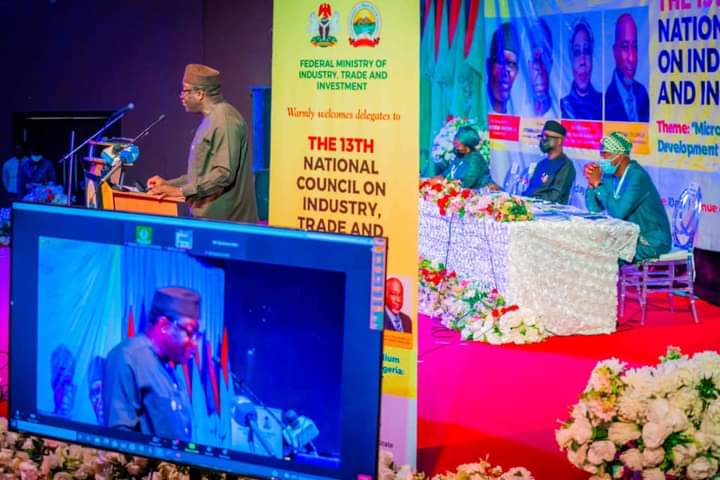 The Federal Government on Thursday flagged off comprehensive sensitization campaign for patronage of made- in- Nigeria products and services in Southwest zone of the country, as part of the highpoint of the 13th meeting of the National Council on Industry, Trade and Investment (NCITI) in Ekiti.

Flagging off the campaign at the Ekiti Civil and Convention centre in Ado Ekiti, the State capital, the Minister for Industry, Trade and Investment, Otunba Niyi Adebayo, explained that the initiative was part of the Economic Recovery and Growth Plan (ERGP) Strategy and National Economic Sustainability Programme (NESP) of the Federal Government to reposition the country’s economy.

He disclosed that patronage of locally made products would create more jobs, promote indigenous product, reduce poverty and also boost the development of Micro, Small and Medium Enterprise, MSMEs across the country.

Otunba Adebayo, also revealed several policies and programmes that had been put in place by the Federal Government through the ministry of Industry, Trade and Investment to reposition MSMEs as the engine room for wealth creation, economic transformation and development in the country.

At the event, where varieties of locally produced goods were exhibited, the Minister and Ekiti State Governor, Dr Kayode Fayemi led other participants to inspect the various locally made products and services that were showcase at the venue.

In his address, Dr Fayemi commended President Buhari’s investment into the development of MSMEs and for collaborating with states to provide solutions that deepens access to finance, market and resources.

Dr Fayemi, explained that aside creating enabling environment for MSMES to thrive in Ekiti, his administration in the last three years, through a collaborative multi-agency approach had attracted almost a $100 million investments in agriculture, technology and infrastructural to the State.

He told the gathering that his administration had also introduced the use of technology to drive MSMEs in the State through the introduction of automated tax payment, business premises registration and other significant economic activities which had led to the attraction of more federal agencies like Standard Organization of Nigeria and Bank of Industry to the State.

The Governor, disclosed that the completion of the State Civic and Convention Centre; which boasts of an upscale shopping area and the flagship of ultra modern Oja Oba in Ado-Ekiti, as well as model markets in all Local Government Areas would no doubt provide trading infrastructures for MSMEs businesses to thrive in the State.

Speaking further on other investment initiatives into the development of MSMEs in the State, Dr Fayemi said; “We also invested in several lending programmes to complement the work being done by the Federal Government. Our Micro Finance and Enterprise Development Agency has facilitated loans to over 4,000 entrepreneurs in the State, with a commitment to do much more next year.

“This Government has awarded over 50,000 hectares of land for agriculture and agri-business opportunities, and our Special Agro-Industrial Processing Zone will be a platform to improve agricultural productivity, as well as a major driver of job creation.

“Finally, the development of Ekiti Knowledge Zone will ensure that Ekiti is a hub for technology businesses in Nigeria. We have started the processing of developing a bankable feasibility study for the zone, and selecting a core investor for the project.

“When this is done, we will approach the Nigeria Export Processing Zone Authority (NEPZA) to confer Special Economic Zone (SEZ) status on the Zone. On our part, no stone will be left unturned in our quest to develop MSMEs, who remain the engine of our economic growth.” He added.
The meeting which started on Monday has in attendance commissioners of Industry, Trade and Investment of the 36 states and their permanent secretaries as well as heads of agencies under the Ministry and representatives of Chambers of commerce.”