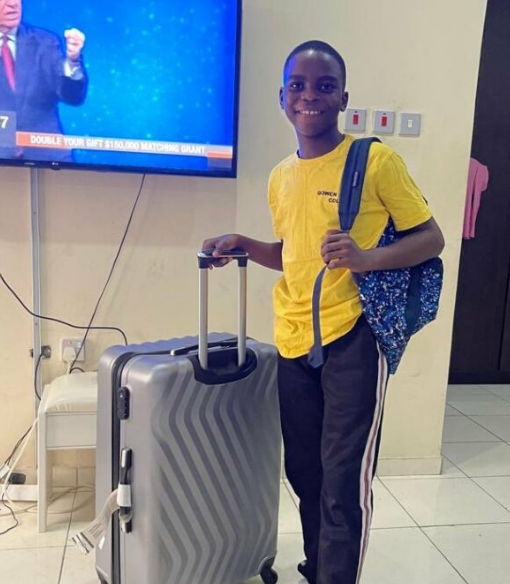 Dowen College, an elite school in Lekki Phase One in Lagos has comes under attacks by celebrities following the controversy and accusations triggered by the death of 12 year-old boy Sylvester Oromoni.

In a statement on Friday, the school said it will be closed for two days.

“In view of the situation concerning the school and considering the emotions of our students we have advised that our students stay home tomorrow Friday 3rd and Monday 6th December 2021.

“This will also afford the students opportunity to revise for their forthcoming examination starting next week.

Oromoni died on 30 November after a week of ill-health, said to have arisen initially from an injury sustained on the football pitch.

A cousin of Sylvester, Perrison, who announced his death took to Twitter Wednesday to accuse the college of condoning murder and trying to cover it up.

He revealed that the 12-year-old passed away on Tuesday after a series of tests and X-rays indicated that he sustained internal injuries from severe beating.

Perrison said: “We’re from Delta State, but he goes to Dowen College in Lekki.

“They called my uncle because his son was injured when he was playing football. Reaching the hospital, it was confirmed that he was being bullied and beaten up, causing internal damages.

“After tests and X-rays, it was confirmed he was beaten up badly. He died yesterday (Tuesday) morning, and his entire body was swollen.

“Before his passing, he said they had been pressuring him to join a cult group.. He said they were going to kill him if he talked.”

Perrison said Sylvester mentioned a few names of the students, who pressured him to join their cult group before he died.

“Anybody that can kill me should kill me now. My brother won’t die for nothing, Anslem Temile, Michael Kashamu and Benjamin Favour and Dowen College, just know he called your names before he died.”
https://twitter.com/perrisonoromoni/status/1466442353338691596?s=20

“They kicked him, matched his waist. He suffered liver enlargement due to congealed blood”.

He revealed the schoolboy’s last words before he died.

According to him, the boy said: “Mummy, I didn’t play ball. I didn’t fall”

He also said the parents of the boys who bullied his son are trying to fly them out of the country.

The senior Sylvester painted a picture of serial bullying of his son in the school, where he has three children.

The latest bullies, he said, are five, four in SS2 while one is in SS1.”

“They put fear in him so much so that, when you ask him, he might keep to himself and say, ‘they will kill me’. This way, we didn’t know what to do.

“I considered removing him since his sisters were still in the school.

“The new incident came to my knowledge on November 21st after the school called my wife to notify us that our son was in the school clinic, injured. My senior son, who was to make a London trip, came to see us in Warri,” he said.

“The next day, we sent a family friend to help pick up our son since he was the only person in Lagos and take him to the hospital.

“When he got there, he panicked, pointing out that he doubts it’s a football injury as the school claimed. He said the boy couldn’t stand because his waist was bent and swollen along with one side of his belly. His mouth was black. I asked, ‘is this really a football injury?’ He was taken to my house in Lagos but couldn’t sleep at night.

“I asked my eldest son to fly to Lagos on November 24 while I took a trip to Asaba, from where I’d also make for Lagos.

“On getting there, he screamed. ‘This is beyond football injury. Come to Lagos now,’ he told me over the phone.”

Dowen College authorities in a statement earlier narrated Sylvester’s illness from 21 November when it was reported that he was injured while playing football.

The principal of the school who issued the statement said first aid was applied and that Sylvester reported for class on 22 November.

The parents were called by the resident doctor, to take the boy for further medical attention.

It was not the parents who showed up, but the guardian in Lagos.

According to the statement, the guardian informed Dowen that further medical checks did not indicate any injury.

This account is different from the one given by Sylvester’s dad, who said the grievous report by the guardian on 23 November, made him to send his eldest son, then in Warri with him, to return to Lagos.

The eldest son also reported back that Sylvester was seriously ill.

The boy died a week later in Warri, triggering negative comments about the school.

Many celebrities and influencer have joined in the attacks, as they called for a probe.

Dr. Dipo Awojide: I have recently read tweets about Sylvester Oromoni Jnr, a student from Dowen College who recently died – allegedly beaten by some other students. I hope the Police, and the Lagos State Government will investigate and ensure that justice is done.

“Last year it was Deeper Life High School. This year it’s Dowen College. What school will be next? Because if nothing is done, there will be more of these cases of assault, molestation, and even death in Nigerian Schools, unfortunately”.

Adesua Etomi-Wellington: Quick question. Is Dowen college still not going to give Sylvester’s family a real explanation about what happened to their son? Face with symbols over mouth
I don’t want to hear any football story.
Do they really think this is going to go away?
Somebody’s child.

Kate Henshaw: Just saw the video Disappointed but relieved face
I went to boarding school
Let’s just say, things were not this terrible in my time.
I enjoyed my time there.
Cut V shape grass (endless cutting), wash toilets (very filthy I must say) etc
Death of a young boy in your care, Dowen College can do better.