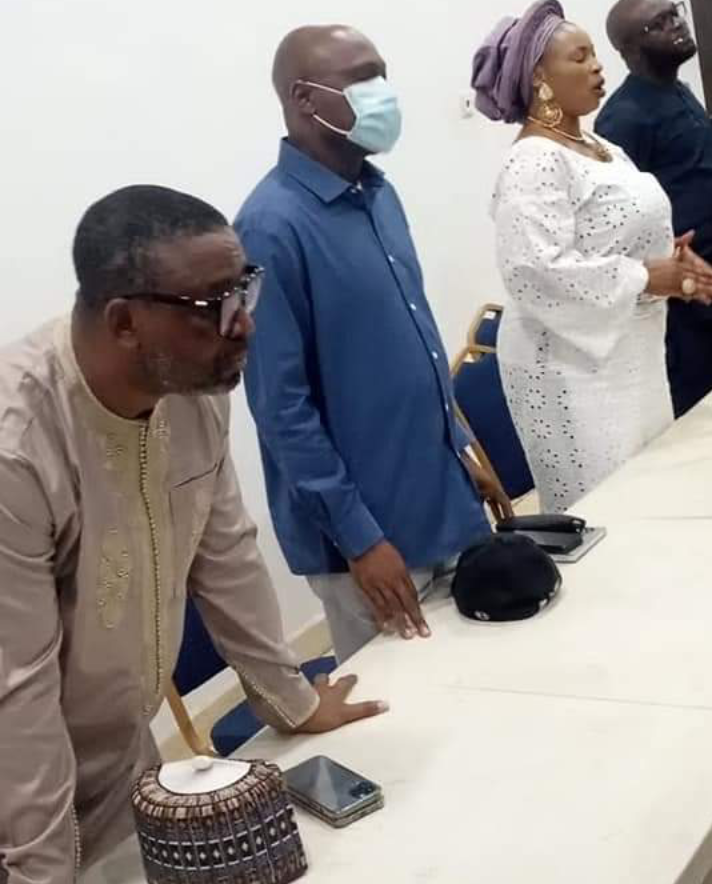 The Secretary to the Ekiti State Government, Mr. Biodun Abayomi Oyebanji has finally declared his intention to vie for the Ekiti governorship race in 2022.

Oyebanji, in an interactive session with some All Progressives Congress bigwigs and numerous supporters in Ado Ekiti State on Sunday, formally signified his intention to contest the APC governorship primary billed for 22nd January, 2022.

The SSG, whose political platform with the acronym ‘BAO’ has been resonating across Ekiti, in an interface with party stalwarts in Ado-Ekiti, applauded his boss for offering him the opportunity to serve in his current capacity. He told the gathering that his ambition to contest the APC governorship ticket is borne out of his interest to continue with the lofty achievements and legacy being solidly laid by his boss, Dr. Kayode Fayemi.

“Having been involved in the system of governance in Ekiti state for 22 years out of the 25 years of its creation, I am  well familiar with the people and I know what the people’s needs are and where the shoes pinches and aches. Above all, there is the need to continue with the lofty achievements and legacy being solidly laid by my boss, Dr. Kayode Fayemi.

“I promise you all to be honest, transparent and carry everyone along in the scheme of governance if given the opportunity to serve as governor”.

“I therefore implore all my teeming supporters not to engage in politics of bitterness with anyone, because all hands must be on deck to make this dream of continuing the good work of Governor Kayode Fayemi a reality,” he said.

In another development, and in sharp contrast to the widespread insinuation that Governor Fayemi was allegedly scheming to impose Oyebanji as the APC candidate in 2022, some APC stakeholders at an interactive meeting with some selected social media evangelists in Ado Ekiti on Sunday at D-Grace Hotel and Garden have clarified that the system rather than imposition threw the SSG up as the preferred person for the continuity agenda.

Speaking at the BAO’s Social Media interactive meeting convened by Alhaji Dauda Lawal(ADL), the spokesperson of the All Progressive Congress (APC) in the South West, Hon. Oladapo Karonwi
said Governor Fayemi and other critical stakeholders within the party listened to public opinions and rating that were favourable to Oyebanji before taking a unanimous verdict that he was the most appropriate person for the plum job.

“It stabs logic in the head for anyone to conclude that Governor Fayemi surreptitiously
manipulated the system in Oyebanji’s favour, who himself has been an experienced politician with strong ties and tentacles with all the strata of the society.”

“Governor Kayode Fayemi is a highly democratic individual and he loves and lives democracy. This spirit he had imbibed right from his pro-democracy days. He never believed in imposition. Rather it was the public opinion that produces Oyebanji as the best person to succeed Dr. Kayode Fayemi.”

“An ardent follower of the happenings in Ekiti APC in the last few years could attest vividly to the fact that Oyebanji had been a highly humble, accessible and well loved personage. He has the carriage and mien of leadership radiating around him and that accounted for his popularity and acceptability across board.”

“Apart from God’s grace, Oyebanji’s popularity within APC and the general public necessitated his endorsement by critical stakeholders in Ekiti APC and not through imposition by anyone,” Karonwi said.

In his opening remarks at the event, and puncturing the highly insidious, phantom, imaginary and unfounded imposition theory, the convener of the Social Media gathering, Alhaji Dauda Lawal, Adl, said under an ideal democratic norm, people determine leadership and not a single individual.

“People’s acceptability comes with legitimacy, and BAO has that in abundance and the BAO project that is gaining traction across Ekiti  is worth fighting for. It is important to allow someone with the right cognate experience, humility, grassroots connection and experience to take the mantle of leadership after Governor Fayemi”.

Lawal added that the social media group is very central, and pivotal to effecting the right packaging to gain further appeals from the grassroots, elites and other members of the state to key into the BAO campaign project.

He stated that the team is fast assembling social media combatants that could spur aggressive campaigns to support Oyebanji within and outside Ekiti APC, so that the party can be well positioned and fortified to win the next election.

Also speaking at the event, Hon. Folorunsho Olabode, described Oyebanji as an embodiment of loyalty and commitment who can be trusted with power.

“This is known to all of us here, BAO never wanted to aspire to be Governor, but the system produced him. His plunging into the race was a product of serious agitations by people that he was the right man to succeed governor Fayemi.”

“For you to know that BAO is not desperate for power and neither power greedy, he had instructed us not to call him Mr governor or his Excellency. This also signposted loyalty to his boss.”

“The next phase of this job is serious marketing to party members. Though, the job will be easier because of his past and present good deeds. Nevertheless, communication with the grassroots is key in the actualisation of the project. We must continue to emphasize that it was the demands of the public that produced Oyebanji rather than imposition”.

Also, the former State Deputy Chairman of the APC, Mrs. Kemi Olaleye, said the choice of BAO for the job will be easier for the APC to win the governorship election in 2022, saying Oyebanji’s qualities of honesty, humility, competence, and accessibility makes him the right man for the job.

Mrs Olaleye warned the BAO political family against making derisive and caustic comments that can sound discriminatory and insulting to anyone, saying all the APC members are one.

The testimonies of Oyebanji’s outstanding philanthropic gestures also evoked sympathies from attendees. They described the SSG as a special breed and a man of impeccable character who can be relied on as a homegrown politician that knows the people and who is well connected to the people.