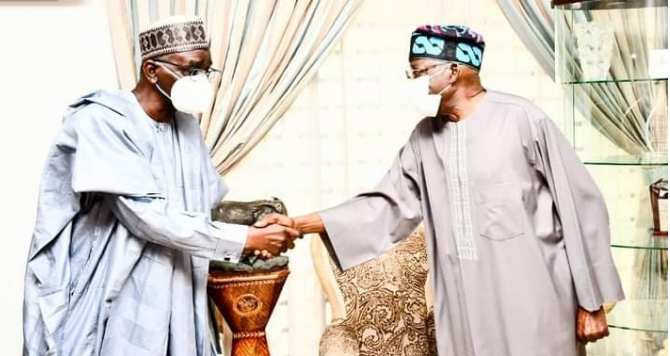 Shekarau, reportedly held a closed door meeting with his Lagos host during the visit.

However, no statement has been issued on the purpose of the former Kano governor visit to the Lagos chieftain of his party at least as at the time of writing this story.

But Shekarau’s visit to Tinubu, who has obviously started consultation with prominent individuals and stakeholders across the country on his interest to run for the presidency in 2023 came against the background of his ongoing battle with Abdullahi Ganduje, the incumbent governor of Kano for the control of the state chapter of APC.

The Kano chapter of APC had been factionalised with one faction tagged G7 led by Shekarau and the other faction led by Ganduje before the recent congresses of the party.

The G7 faction and the Ganduje faction of the party had elected two parallel executives at the congresses of the party, including the 18 October state congress.

While the G7 faction elected Haruna Danzago as the chairman of its executive, Abdullahi Abbas was elected to lead the Ganduje faction of the party.

The G7 faction had consequently petitioned the National Headquarters of APC.

But the APC National Appeal Committee had recognized Abbas as the authentic chairman of the party in the state.

Shekarau challenged the decision in court, asking for the nullification of the congresses at the ward, local government and state levels conducted by the Ganduje faction while his own should be recognized.

In a judgment delivered on Tuesday, a Federal High Court in Abuja granted the Senator’s request while also restraining the Ganduje faction from appointing a new executive.

Members of the Ganduje faction had vowed to appeal that judgment while arguing that the Federal High Court in Abuja lacks the jurisdiction to hear the case.

Kano Commissioner for Information, Mohammed Garba, in a statement, also said the court ruling only affected the ward congress of the party.

But members of the Shekarau faction have been rejoicing over the court judgment.

Analysts have also been pontificating on its implication for the 2023 presidential ticket of APC, especially if the judgment was not upturned.

For one, Kano has played pivotal roles in presidential election in Nigeria because of its huge population.

The state, with the high number of political appointee and party members will even play a crucial role in determining who emerges the presidential candidate of APC because of the huge voting strength it will bring to the table regardless of whether direct or delegate system is used for selection of its flag bearer.

Ganduje and members of his faction of APC are believed to be strong supporters of the presidential ambition of Tinubu.

Members of Kano House of Assembly who are mostly loyalists of Ganduje had also, at various times, pledged to work for Tinubu presidency.

And for the first time in a decade, the annual Tinubu Colloquium was held in the ancient city this year, a move believed to be arranged by Ganduje to popularise the former Lagos governor’s presidential ambition in the Northern part of the country.

The expectation was that Ganduje will bring in the strength of Kano APC to support Tinubu when the push comes to shove on the selection of APC presidential candidate.

But with the court judgment which at least for now, effectively put the control of the structure of Kano APC in the hands of Shekarau, such expectation seemed to be in jeopardy.

Indeed, a national newspaper had on Saturday reported that the judgment giving control of Kano APC to Shekarau was a setback for presidential ambition of Tinubu.

2023: North has no justification to remain in power – Tanko Yakasai