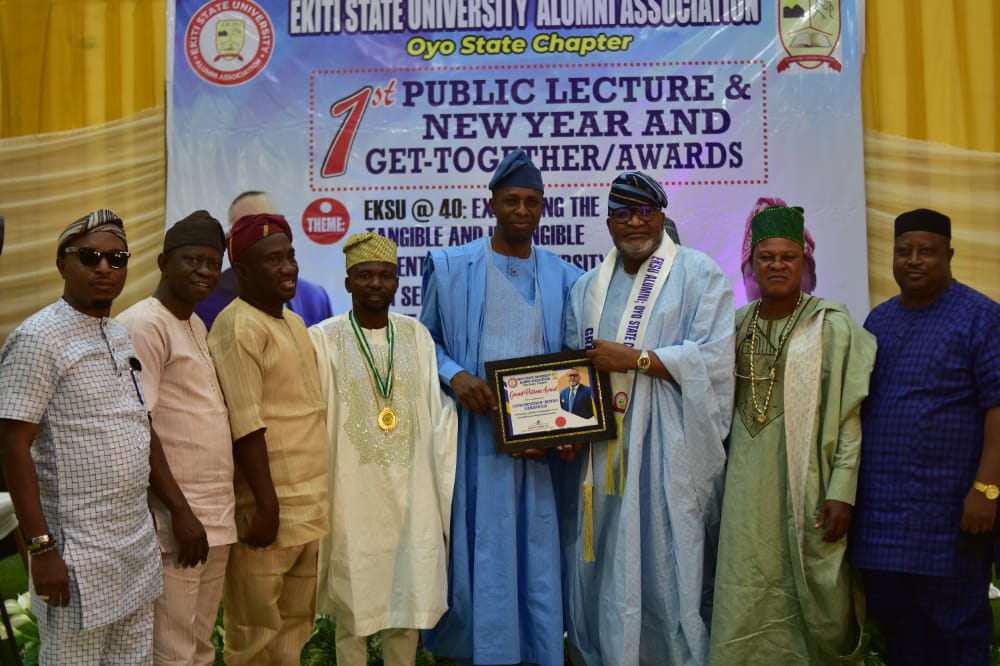 Ekiti State Governor, Dr Kayode Fayemi and first civilian governor of Ekiti State, Otunba Niyi Adebayo have received recognition award and award of excellence as good ambassadors and for their sterling contributions to overall growth of the Ekiti State University.

While Owoseni bagged the prestigious Leadership Award for his contributions to nation building.

The Chairman, Adebayo Blessing affirmed that these awardees were considered for recognition due to their exemplary leadership credentials and sterling contributions to the association and development of their alma mater. He further stated that one of the key focusses of his administration is to bring everyone together and build a platform that will be participatory and mutually engage which in turn have a positive influence on the growth of our University.

The event, which was the first of its kind by the State Chapter, had a public lecture delivered by Bimbo Daramola on the theme “[email protected]: Exploring the tangible and intangible potentials of a university for self – actualization in the 21st century”.

The lecture appraises EKSU at 40 years and how the institution will live the realities of the 21st century and fulfil her potentials both tangible and intangible.

He said, “The 21st century will increasingly foist on individuals or even institutions the need to demonstrate independence, build strong knowledge content, as we know it is becoming a knowledge driven age, leveraging on changing faces of technology across all disciplines from medicine through music production to agriculture with copious place for new digital realities in all spheres.

“The 21st century while embracing strong element of independence also compels the ability to collaborate and strike productive partnerships to accomplish shared objectives and goals for mutual success within a specific order and time.

”The beauty of the 21st century is the fact that inside its seeming haze of confusion lies the opportunity for self-actualization if and when the peculiar characters and characteristics are properly understood and appropriately contextualized and internalized along the aforementioned lines. Therein rest the demand for understanding of potential needed for self-actualization.

“Regardless of the evolving nature of knowledge acquisition, again one of the features of the 21st century, the University embodies the citadel of learning, the habitation of knowledge.
Realistic as the existence of Google and internet may be, I personally still see the relevance of University beyond matriculation and convocation days, what will continue to make the University relevant is what goes on within the four walls of the campus, over the 4 years or 6 years course (baring the prevalent ASUU strikes) this further amplifies the meaning of that statement, having satisfied this University in “character and learning”
Google or internet does not teach character!

“The language that the century speaks is the language of human performance and delivery on tasks and duties and realisation of organization goal not certificates. Most of the human signposts success today do not parade University Certificates. They are straight employers not employees, this must be at the centre of EKSU s renaissance for self-actualization in the 21st century.

“Indeed, the complexion of the realities of the 21st century does not even accommodate “certificate flaunting individuals” rather those who can be intuitive to discover or acquire skills set and develop them, be able to communicate and market such skills, these are the persons who will lead and shape the 21st century, and this does not accommodate the traditional if not colloqual mindset of “papers” issued in a scroll on convocation days signifying the highest or peak of acquisition of University education. EKSU MUST KNOW THIS FACT” the lecture in parts.