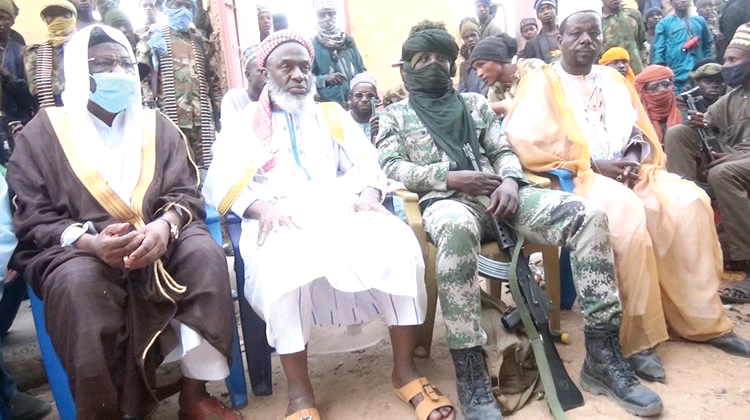 Controversial Kaduna-based Islamic cleric, Sheikh Gumi has challenged the Nigerian Army to bring proof that it had indeed killed two bandit kingpins in a recent airstrike in Zamfara.

He said this in reaction to reports that two bandit leaders: Alhaji Auta and Kachalla Ruga, were killed in a forest in Zamfara State during an air strike.

Gumi who spoke through his media consultant, Tukur Mamu to journalists on Tuesday said usually when there are airstrike in villages, innocent people are victims and not real bandits.

The Islamic cleric further called for dialogue and amnesty between the federal government and bandits across the country.

“There is a particular forest we visited in Niger State. The whole of the settlement had been bombarded. This settlement has nothing to do with bandits. In fact, they showed us two wells full of innocent people, dead, casualties of these bombardments.

“That’s exactly what these bandits were telling us. They said whenever we hear the sound of an aircraft, we run to our caves and then run. If they will succeed in killing anybody, it is the small children, the wives or the cows.

“That’s their own testimony. So you can imagine a country where, for example, bandits would gather in a forest and be celebrating. You don’t even have the intelligence to track them and eliminate them. Then you to say you will succeed in killing them.

“I hear them yesterday celebrating the reported death of bandit leader. So, for example, if you kill one bandit leader and another one emerges, what benefit did you derive?

“For example, you killed Dogo Gide, a person more dreaded than him emerged. When they killed Buharin Daji, Turji emerged. So what’s the success there? And for us to even be celebrating. There is nothing to celebrate, the only thing we can celebrate is that if our military succeeds in crushing them all and they cannot.”

Going into dialogue with the bandits, he said, was not a sign of weakness, noting that the peace enjoyed in the oil-rich Niger Delta, was as a result of dialogue the late President Umaru Yar’Adua entered with the militants there.

“You have to address so many economic issues and so many issues of injustice. And then for you to pursue the path of dialogue. It is not a sign of weakness. That’s what Yar’Adua initiated in Niger Delta.

“Do you think the silence we used to hear now from Niger Delta is because of guns? Is it because of military might? There are many top militant commanders that have been on the payroll of the Federal Government for the past eight years. They are the richest now, top militants, commanders.

“But this is a silent issue that nobody knows. But that is the reason why you can explore oil and then exploit it. The only reason why their own is different is because the Federal Government knows that if they didn’t do something there, it will affect the whole economy. That’s the issue,” he added.