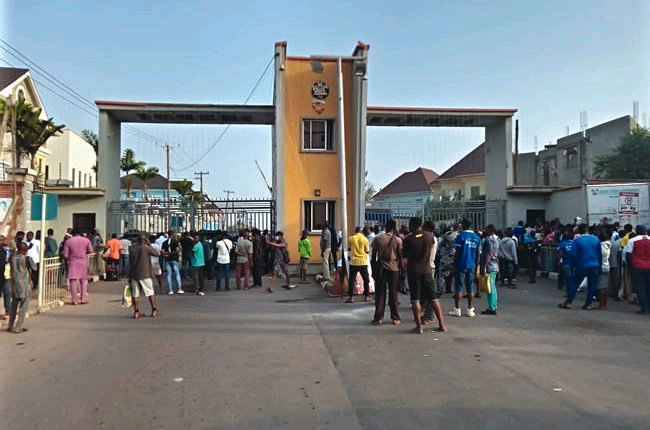 An unidentified Assistant Superintendent of Police on Tuesday refused to obey Governor Babajide Sanwo-Olu’s order to evacuate police officers who had laid a siege at the Magodo Phase 2 Estate in Lagos.

In a video obtained, the governor, during his visit to intervene in the lingering land crisis, met with the police team leader and instructed him to call his superiors, who gave the order to invade the estate, that the governor wanted the decision rescinded.

On Tuesday morning, many residents of the estate protested the continuous presence of armed police officers.

The protest and closure of the estate gate grounded vehicular movement as some president and business owners were prevented from going to their various destinations.

“Can you call your superiors in Abuja? That the governor is here and I’m the chief security officer, tell them that you don’t have any business in my state and that I want you to disengage from here.

“That’s why I want you to make a phone call and tell your superior that I’m here, standing in front of you. Make that phone call.

But the assistant superintendent of police told the governor that he only answers to the instructions of his superiors.

“Yes, sir, I’m here on the instruction of the inspector general of police, through the attorney general sir and that is why I’m here. I’m too small or too low to call them, your excellency, with due respect, you can call them directly, Sir.”

When the governor asked him who his superiors were? He said the “Inspector General of Police, through the AGF.”

Mr Sanwo-Olu said he had spoken to the Attorney General earlier in the day and he isn’t aware of the police presence.

When the governor asked him the number of police officers in the estate, the ASP decline to state the figure “for security purpose.”

Describing their operation as illegal, Mr Sanwo-Olu reiterated that the AGF wasn’t aware of the police presence.

Resolution
During the visit, Mr Sanwo-Olu ordered a stand down. He said a committee has been set up to resolve the crisis.

He also scheduled a meeting with all parties involved in the land crisis on Wednesday by 11 am.

Backstory
Earlier in December, there was unrest at Magodo Phase 2 estate in Lagos, on Tuesday, when dozens of police officers and officers of the Shangisha Landlord Association invaded the estate to execute a court judgment.

According to witness accounts, the police officers and members of the Shangisha Landlord Association came with bulldozers in an attempt to pull down properties within the estate.