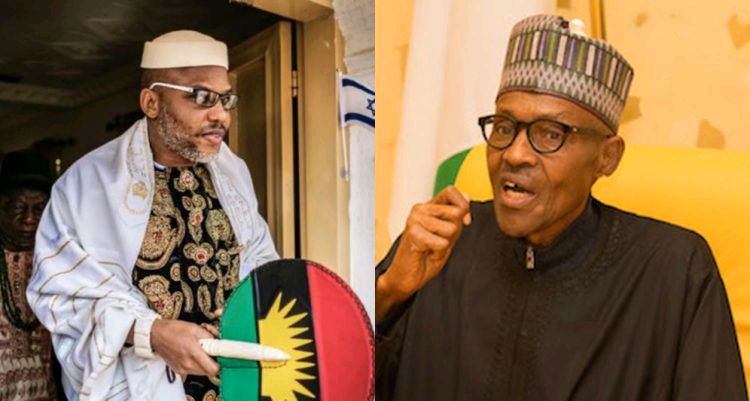 The leader of the proscribed Indigenous People of Biafra (IPOB), Nnamdi Kanu, said he is not perturbed by the statements made by President Muhammadu Buhari.

Buhari had in an interview on Wednesday said he will not release Nnamdi Kanu from detention despite appeals from Igbo elders.

Buhari had said; “For those who are saying that we should release him, no we cannot release him.”

However, Nnamdi Kanu, who spoke through his lead counsel Ifeanyi Ejiofor on Thursday, said he only demands a fair hearing and treatment.

Speaking after a visit to Nnamdi Kanu in the DSS custody, Ejiofor said: “We were not one bit perturbed by his (Buhari) response knowing fully well that they have no case against our Client.

“What we are earnestly asking for is nothing else, but for the executive arm of Government led by the President of the FRN, to desist from further interfering in the judicial process.

“We can authoritatively confirm to the World that the executive arm of the Government of the FRN, ably led by the President is gravely and effectively interfering in our Client’s judicial proceedings.

“To demonstrate good faith and impartiality, we beckon on the President of the FRN to first caution the DSS which answers solely to him, to obey all Court Orders as it relates to the management of this case.

“Our Client, Onyendu Mazi Nnamdi Kanu should not be detained in solitary confinement (which is an act of torture) in the custody of the same Agency accusing him of committing sundry offences and expect fair hearing. Hence, there is no independence of the judiciary as far as this case is concerned, and the President of the FRN is fully aware of this.

“If it is the position of the President of the FRN to allow fair hearing, he should follow up and ensure its reality, most promptly.”

President Buhari had in November last year promised to consider the request of some leaders from the South East region to release Kanu who is facing treason charges preferred against him by the Nigerian Government.

Although he told the Igbo leaders under the aegis of Highly Respected Igbo Greats that they had made an extremely difficult demand, he insisted that the best thing was to subject the IPOB leader to the judicial system.

In his interview with Channels Television, the President doubted if Kanu was willing to return to the country to clear his name from the allegations against him after he fled in 2017.

“There is one institution that I wouldn’t dare interfere with – that is the judiciary,” he said.

“Kanu’s case is with the judiciary, but what I wonder is when Kanu was safely in Europe abusing this administration and mentioning too many things, I never thought really he wants to voluntarily come and defend himself on the accusations.

“So, we are giving him an opportunity to defend himself in our system, not to be abusing us from Europe as if he was not a Nigerian. Let him come here to us and then criticize us here.”