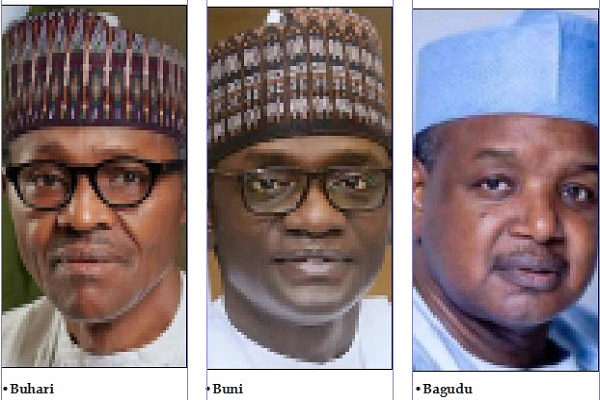 ***How APC govs begged President to intervene; to meet on Wednesday

All Progressives Congress (APC) leaders are rallying to keep the party on track for its crucial national convention following Thursday’s warning by President Muhammadu Buhari that the party should keep its house in order ahead of next year’s elections.

Governors elected on the platform of the APC yesterday met with Buhari, 24 hours after his warning as part of the efforts to resolve the logjam holding up the convention.

A follow-up meeting of the governors has been scheduled for Wednesday to pick a definite date for the convention.

The meeting was originally planned for tomorrow.

Buhari personally asked for the convention timetable from the Caretaker and Extraordinary Convention Planning Committee (CECPC) of the party, The Nation gathered yesterday.

Simultaneously, the Director-General, Progressive Governors Forum (PGF), Salihu Lukman, wrote a memo to the APC hierarchy, asking the CECPC to proceed with the convention plan or resign.

It was learnt that some governors, including an influential one, had reached out to the President in the last one and a half weeks to intervene in the hiccups delaying the convention.

According to investigation, Buhari had received representations from some governors and party leaders on the danger of not holding APC National Convention on time.

It was learnt that the President was no longer comfortable with the delay of the convention.

A top source said yesterday: “The dilly-dallying over APC National Convention may soon end because President Muhammadu Buhari has asked the Caretaker Committee to come up with a timetable for the convention.

“The President’s directive might have been informed by representations from some governors and stakeholders to him in the past few weeks.

“The representations and looming stress in the party made the President to warn APC leaders and members on Thursday of the consequences of disunity in the party.

“If the Caretaker Committee can draw a timeline, there will be less tension in the party. Let us hope something will be done.”

But a Presidency source said: “I have not been told that (the directive)”, while a state governor said he was aware that the President “has taken action and given advisory to the Caretaker Committee to act on a timeline for the convention.”

The governor added: “We have got a notice of a meeting of APC governors on Sunday in Abuja. We will discuss the advisory of the President and agree on a date for the convention.

A governor said: “We have reached a critical point to save the party and the CECPC from rebellion. Some of us are becoming impatient with the conduct of the Caretaker Committee, but we do not want a full blown crisis in APC.

“A few of us have gone to the President to give him the other side of the way the party is being managed and the danger ahead.

“Ordinarily, the Chairman of CECPC, Governor Mai Mala Buni, is a good man who cannot hurt a fly. But some of our leaders are taking advantage of his broad-mindedness to misdirect the Caretaker Committee.

“Even some governors who did not know how APC was formed are neck-deep in trying to hijack the activities of the Caretaker Committee.”

Governors Simon Lalong of Plateau State yesterday confirmed a planned meeting of the APC governors to decide on a definite date for the party’s National Convention.

Emerging from a meeting with Buhari at the Presidential Villa, Lalong said the President’s Thursday warning to the party was a signal for the APC to have a seamless convention to avert disintegration.

The warning, according to him, was for the APC to redouble its effort and do the right thing.

His words: “You know, when convention is coming, there are fears here and there. Some people will tell you it will work, it will not work.

“I don’t want to jump to conclusion, but the visit to the President has already assured us and you know that there is already a notice that all the governors are meeting on Sunday.

“By Sunday, we will tell you when we’re doing the convention.”

It was learnt last night that the meeting was rescheduled for Wednesday.

“We’ve taken a date already. I think (during) our first date before Christmas, we said we were going to do convention in February and we are still working for convention as far as I’m concerned, except things change from another angle.

“But as far as I’m concerned, we’re working for our convention in February.

“These are the things that the President was raising fears about. But we’ve already given him assurances that nothing will stop us from having a very peaceful election.

“Some parties have done their own. The PDP did their own; nothing will stop APC from doing their own.

“So, all the fears that we’re talking about, which the President also re-echoed, is all about telling the governors ‘please do more, keep the party alive’. So, by God’s grace, we’re going to keep our party alive.

“Well, these are things we’re going to discuss. But I’m not drawing any conclusion. I always tell you that a political party is a cumulation of interests. The interests may be the same, they may not be the same, but at the end of the day, what we’ll do is that we are going to elect people who are going to represent you.”

Lalong said tomorrow’s meeting would address all the contending issues affecting the conduct of the convention.

“When we meet, we’ll harmonise all interests and we’ll come out as one APC, and that’s what we’re hoping that whatever will be the interests that we’re going to discuss, I have a very great hope that at the end of the day, our goal is to elect people who will take care of our party, because that will be the beginning of the process towards electing those who will take over from the present government.”

Asked if the many court cases pending against the party and its leadership would not scuttle the planned convention, he said: “There are procedures to holding court processes.

“Many of the court processes were there when we set up the caretaker committee, but up to this moment, if you go to take a census of some of the court proceedings, you will realise that a lot of them have been resolved out of court.

“I had a court process in my state; that did not stop me from going on, and at the end of the day, we resolved the court process and we’re still going on, preparing and waiting for convention.”

On whether the APC could meet the speculated date of February 5 for the convention in view of the need for a mandatory 21-day notice to the Independent National Electoral Commission (INEC), Lalong said: “Well, I’m not the chairman of the convention committee, but I want to assure you that we’ve called a meeting for Sunday, and if there is a meeting on Sunday, and you’re thinking about next Friday, just wait and see what will happen before next Friday. I don’t want to draw conclusion now.

“You’re already talking of litigations, you draw conclusions, somebody will go and file a case tomorrow. So, I don’t want us to draw a conclusion on that. But I want to assure you that we are meeting.

“We’re meeting and we’re very hopeful that we’re going to keep and then with the admonition given by the President, it’s a warning signal to all of us to sit up and ensure that we have a seamless, very clean, fair and transparent convention so that our party will not get disintegrated,” he said.

PGF DG: Caretaker committee must hold convention or give way

In a memo to governors elected on the platform of the APC, the Director General of the Progressive Governors Forum (PGF), Salihu Lukman, drew their attention to the danger of further delay in holding the convention.

Lukman, in the January 3, 2022 letter entitled ‘Plausibility of February 2022 APC Convention’ said the governors and others in the party risked being damaged politically if the needful was not done immediately.

“Once things go wrong with the party, the governors and especially the leadership of the Forum will be damaged politically,” he said.

“More worrisome is the fact that we would have all succeeded, both leaders and members, to have contributed to damaging the political credentials of President Muhammadu Buhari.

“APC leaders should imagine the consequences of ruining the electoral potentials in 2023 such that beyond losing the Federal Government, self-implicated legal challenges are created to weaken the party simply because of actions or inactions of HE Buni and Secretary, John James Akpan Udoedehe.

“Already, some media reports are suggesting that the work of Sen. Abdullahi Adamu’s Reconciliation Committee will determine whether the convention should hold in February or not.

“Senator Adamu himself has argued that they will conclude their work and reconcile those that can be reconciled by the end of January 2022. It needs to be stated that so long as the party exists, there will always be leadership disputes.”

Buhari, in his Thursday television interview, had urged APC leaders to put their house in order to enable the party retain power in 2023.

He warned against the persistent differences, disunity and lack of agreement, which he said could put the platform in jeopardy during election.

“We have a timeframe we have to work because the four-year tenure is constitutional. It cannot be interfered with by anybody. So, if the APC can’t agree, then the opposition will naturally take over,” he said.

Continuing, he said: “What did the PDP do? They said the opposition could not come together. But when ACN, ANPP, CPC, APGA came together, before PDP realised it, they were off. They are still off. They can see it.

“My position is simple. I think I succeeded in trying to get my position understood in the sense that I said, we start from bottom upwards; from polling units to wards, to local governments, to states and then, to Abuja.

“So, the party, because I’m concerned about my party, the party, in all constituencies, they will know their leaders, coming up. Therefore, when they come to Abuja, they are likely to work together.”