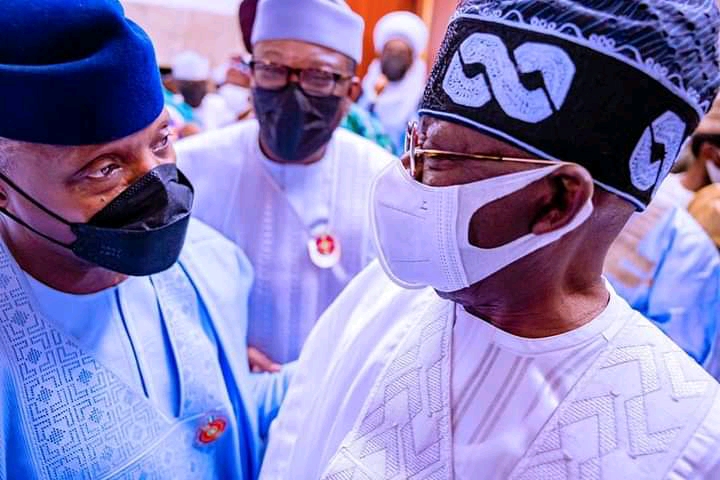 Vice-President Yemi Osinbajo, National Leader of the All Progressives Congress, Bola Tinubu and the Ekiti State Governor, on Saturday, were among dignitaries that visited Azare, Bauchi State, to attend the wedding ceremony of the daughter of the Minister of Education, Adamu Adamu.

The Minister’s daughter, Fatima Adamu, tied the knot with Ibrahim Gamawa in a wedding blessed by the Chief Imam of Azare Central Mosque, Abdullahi Usman, after the pronouncement of N100,000 dowry.

Congratulating the Adamu family on the occasion, Buhari advised the couple to commit to a life-long union.

In his goodwill message, the Gombe State Governor, Yahaya, said it remained the wish of every parent to see their children grow into adulthood and have their own home with a view of raising their own family.

He charged the couple to imbibe the spirit of tolerance, patience and love while their marriage lasts.

While in Azare, the Vice President led other dignitaries on a courtesy visit to the Emir of the Katagum, Umar Farouk, where he said that Nigeria’s unity cannot be threatened by ethnicity, religion or class.

The Vice President noted that the roll call of guests at the event was evidence of Nigeria’s indivisibility regardless of ethnicity, religion and class.

On his part, the Emir commended the President for all the projects that he was able to complete. They include the Kano-Maiduguri Road passing through Azare town and locating the University of Medical Sciences in the State, among others.

Meanwhile, the presidential delegation left Azare for Kano State to commiserate with the Kano community and the family of the late Islamic religious leader, Dr Ahmed Ibrahim, who was buried in the city on Friday. Dr Ahmed was a renowned exponent of the traditions of the Holy Prophet Muhammed (SAW).

In an earlier tribute, Buhari described the late Dr Ahmed as “a personality of faith, who dedicated his life to Islamic education. His emphasis on the unity of Muslims, good education, and women’s rights will always be remembered. We offer our heartfelt condolences and pray for the eternal repose of his soul.” (The Punch)