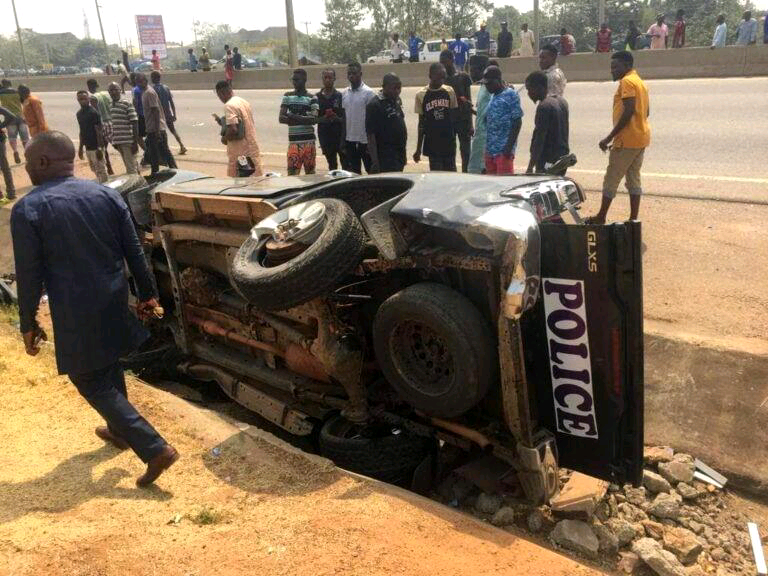 At least three Police Officers on Sunday lost their lives to a fatal motor accident along the Kubwa-Zuba expressway when the patrol van in which they were traveling experienced a burst tyre and crashed into a drainage.

The accident which occured opposite the Gwarimpa Estate section of the road, later revealed that it involved operatives of the Special Tactical Squad (STS) of the Police attached to the Force headquarter’s

Eye-witness account’s said the speed of the vehicle and the impact of the collision with the hard drainage pavement caused the instant death of the 3 officer’s while others sustained various degrees of injuries.

A witness said, “I was about crossing the road to the other lane when the Police Patrol van on top speed, suddenly lost control and crashed into the drainage divide, leaving three policemen dead.”

The police officer’s were said to be heading to Kaduna for s special assignment before the accident occured.

Officials of the Federal Road Safety Corps (FRSC) and the FCT Emmergency Management Agency were later seen evacuating the bodies to an undisclosed hospital.

FCT Police Public Relation’s Officer, DSP Josephine Adeh who confirmed the incident, noted that it was a sad development pointing out that she did not have detail’s of the number of casualty involved in the accident.