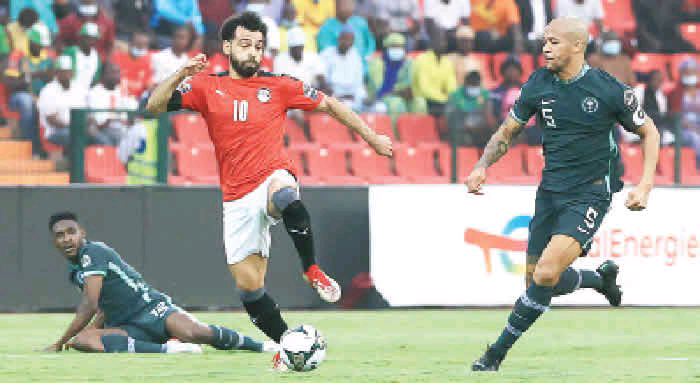 Leicester City attacker, Kelechi Iheanacho’s 30th-minute goal was all Nigeria needed to beat dreaded Egypt in the Africa Cup of Nations at the Roumde Adjia Stadium in Cameroon.

The Eagles continued to dominate and created another chance but the goalkeeper made the first save of the game to deny Samuel Chukwueze.

Right-back Ola Aina’s misplaced pass in the 16th minute allowed the Pharaohs to launch a counter-attack on the Eagles, but a revitalised Nigerian side regrouped to prevent any harm.

Winger Moses Simon could have put the Eagles ahead in the 23rd minute but wasted a glorious chance as he failed to score from close range after he was set up by Aribo with only the goalkeeper to beat.

With 30 minutes on the clock, Austin Eguavoen’s side were rewarded for their dominance after Leicester City forward Iheanacho’s stunner beat goalkeeper Mohamed El Shenawi following a nice assist from Aribo.

Nigeria had the final say in the first 45 minutes as Awoniyi shot was easily saved by El Shenawy, before the referee brought an entertaining first half to an end.

Eguavoen over Egypt win
Nigeria picked up from where they left off as the second half resumed.

An impressive Awoniyi thought he had doubled the Eagles lead as he wheeled away celebrating but was unlucky as he saw his header strike the crossbar, before the game was suspended momentarily after Wilfred Ndidi went down and players requested for medical attention.

But the midfielder was able to continue play.

Despite their 1-0 lead, Nigeria continued to press forward in search of a second goal. Carlos Queiroz’s side were second best for virtually the entire game as they struggled to break down the Eagles defence.

A win for Nigeria on Saturday against Sudan will send the three-time Africa champions to the knockout stages as Egypt seek their first victory of the tournament.