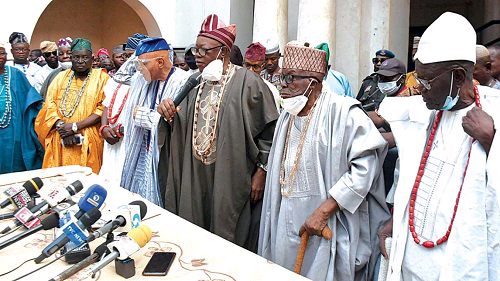 An Oyo State High Court has ordered the Otun Olubadan of Ibadan land, High Chief Lekan Balogun, and other high chiefs in Ibadan to explain themselves further.

The court, which was presided by the Oyo State Chief Judge, Justice Munta Abimbola, gave the order on Friday in Ibadan, the state capital.

Recall that Balogun and seven other high chiefs were in 2017 elevated to the position of Oba by the immediate past Governor of the state, Abiola Ajimobi.

The decision was challenged by the then Olubadan, Oba Saliu Akanmu Adetunji, and a former governor of the state, Rasidi Adewolu Ladoja, who is also the Osi Olubadan of Ibadan land.

The court has however urged Balogun and other high chiefs to file their further written addresses to narrow down their arguments.

It was also gathered that Balogun is believed to be the next in rank to succeed the immediate past Olubadan of Ibadan land, late Oba Saliu Akanmu Adetunji.

Adetunji joined his ancestors in the early hours of Sunday, January, 2nd 2022.

The Olubadan stool has been vacant since then.

The court on Friday told Balogun, who is eyeing the seat of Olubadan, and others to come forward and explain themselves further.

Abimbola said there were some ambiguities in the many processes filed in the suit.

He added that this made the need for further clarification of addresses necessary.

The judge explained that the processes filed by parties in the matter when the case came before the court for determination on the validity of the consent judgment were many.

Abimbola, while speaking further, cautioned counsels to ensure their addresses stay focused on the law and not deviate from laid down principles of practice and points of law.