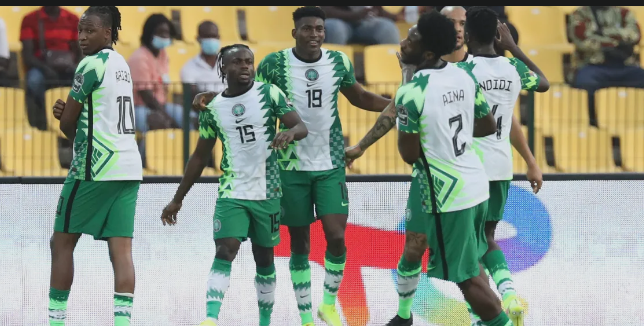 In five meetings at the Nations Cup since their first meeting in 1978, the Super Eagles of Nigeria are yet to lose to the Carthage Eagles of Tunisia. Though the Tunisians are currently better ranked by FIFA than the Nigerians, the showing at AFCON 2021 throws that on its head.

Nigeria won all their group matches-scoring six goals and conceding just one – a soft penalty against Sudan; while Tunisia scraped through their group; winning once and losing twice. They scored four goals (all against 172nd-ranked Mauritius) and conceded twice.

The only lingering thought in Coach Augustine Eguavoen’s mind will be whether to start with Samuel Chukwueze on the right-wing after a below-average showing against Egypt and Sudan.

However, both Alex Iwobi and Chidera Ejuke failed to grab the opportunities to nick ahead of the Villarreal forward.

Tunisia have a rash of positive Covid-19 cases; about 11 players will miss the clash if various reports are to be believed. One player not suffering Covid, but who will nonetheless be missing is Farouk Ben Mustapha who received a red card in the last group encounter against The Gambia.

Nigeria will win if these five players perform to their optimum

Moses Simon – The Nantes forward has been tearing it up in Cameroon and has created goal-scoring chances and scored. He even sent Egypt’s Akram Tawfik to the hospital with a dribble. If his end product gets any better in Cameroon then Tunisia’s Hamza Mathlouthi will be in for a long 90 minutes.

Wilfred Ndidi – With Ndidi on the pitch, the Eagles’ defense is almost impregnable. Ndidi has already managed 12 tackles and five interceptions, the Leicester defensive midfielder has been dribbled past three times.

Ola Aina – Aina has been a rock-both defensively and offensively. The Torino defender has created one big scoring chance and has had 134 touches on the ball. He has been dribbled past just once while making six interceptions.

Joe Aribo – The Rangers’ man has been smooth as silk and rugged as steel as he has provided the perfect foil for Ndidi in central midfield. He should have scored against Egypt after providing the assist for Kelechi Iheanacho.

Taiwo Awoniyi – The burden of trying to score a first international goal meant Awoniyi was snatching at chances but having scored the important first-ever Super Eagles goal, the Union Berlin hitman should be a more composed player when scoring chances are created on Sunday against Tunisia.