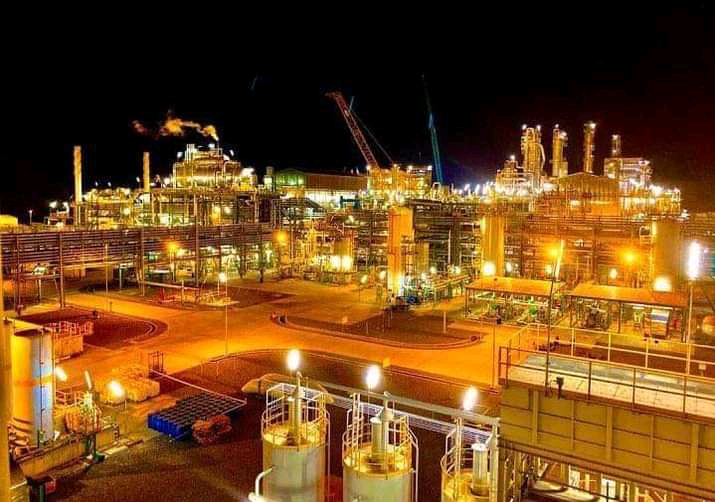 President Muhammadu Buhari has commissioned the Dangote Fertiliser Plant in the Ibeju-Lekki area of Lagos.

He inaugurated the multi-billion dollar facility on Tuesday at an event well attended by many political, traditional, and religious leaders, as well as key members of the private sector from various parts of the country.

They include the President of the Senate, Ahmad Lawan; Speaker of the House of Representatives, Femi Gbajabiamila; Chairman of the Nigeria Governors’ Forum, Kayode Fayemi; as well as members of the forum including Babajide Sanwo-Olu (Lagos), Darius Ishaku (Taraba), and Badaru Abubakar (Jigawa).

President Buhari inaugurated the facility as part of activities lined up for his working visit to Lagos. He was also billed to inaugurate the newly built terminal at the Murtala Muhammed International Airport, as well as inspect the ongoing construction at the Dangote Refinery and the Lekki Deep Sea Port.

The Dangote Fertiliser Plant is Africa’s largest granulated urea fertiliser complex. It occupies 500 hectares of land in the Lekki Free Trade Zone and was built at about $2.5 billion.

It is expected to help Nigeria retain $125 million in import substitution and provide $625 million from exports of products from the fertiliser plant.

In the course of its construction, the complex is said to have provided about 5,000 direct and indirect jobs in all categories, an additional 5,000 jobs within the community, as well as created 500 permanent jobs.

In his speech before commissioning the facility, President Buhari was delighted that the plant would further advance his administration’s drive towards achieving self-sufficiency in food production in the country.

“I commend the Chairman, Board, and Management of Dangote Industries Limited for their business initiative in building this plant to reduce our dependence on importation of fertiliser, create jobs on a massive scale, increase the inflow of foreign exchange and accelerate economic growth,” he said.

“This new plant is a testament to the widely acknowledged patriotism of Aliko Dangote and the leadership of Dangote Industries Limited. It also demonstrates their commitment to the socio-economic development of our country and the wellbeing of our people.

“I am confident that the investment in this plant will replicate the group’s earlier exploit in the cement sector where Dangote Cement holds the enviable record as our continent’s largest cement producer with footprints in 10 other African countries. The group’s investment in integrated cement plants, spanning the value chain from quarry to bagging has effectively ended Nigeria’s dependence on imported cement products.”

According to the President, Dangote Industries Limited, along with several other subsidiaries, has created thousands of jobs across the country.

He described the company as the second biggest employer of labour in Nigeria after the Federal Government, stressing the importance of job creation by private sector operators to national security.

President Buhari stated, also stands to gain extensively in earnings of foreign exchange from the excess production and export from the plant.

“I am informed that you have already started exporting to other countries, including the United States, India, and Brazil,” he said. “The coming on stream of the plant is creating huge opportunities in the areas of job creation, trade, warehousing, transport, and logistics.

“This will create significant wealth, reduce poverty, and help in securing the future of our nation. In the agriculture sector, another focal point of our economic policy, we expect a boom as fertiliser is now readily available in greater quantities and better quality.

“Many Nigerians who hitherto practised subsistence farming because of the inability of necessary inputs can now take up agriculture as a business.  We expect the rise of a new breed of agro-preneurs who will add value to farming and make the nation self-sufficient in food production.”

President Buhari assured Nigerians that his government would remain focused on providing an enabling environment for the private sector to thrive.

He also promised that they would continue to improve on infrastructure, power, and security, as well as enact relevant laws and regulations that would drive investment in the economy.

In his speech, the President of Dangote Group, Aliko Dangote, believes the plant will make Nigeria self-sufficient in fertiliser production, with excess capacity to export to other African markets and the rest of the world.

He described its commissioning as very historic, saying it is the largest granulated urea plant in Africa and the second-largest in the world.

Africa’s richest businessman hinted that the plant would help Nigeria retain about $125 million in import substitution and provide $625 million from exports of its products.

“It is an ambitious developmental project which will drastically reduce the level of unemployment and youth restiveness in this country, through the direct and indirect employment,” he said.

“Our goal is to make fertiliser available in sufficient quantities and quality for our teeming farmers in achieving greater agricultural outputs and to help realise this potential, we are rolling out initiatives that will transform the agriculture sector including services for all small and medium-scale farmers.”

Dangote informed the audience at the event that the plant has established well-equipped soil testing laboratories to ensure appropriate fertiliser blends were applied to specific soil and crop types.