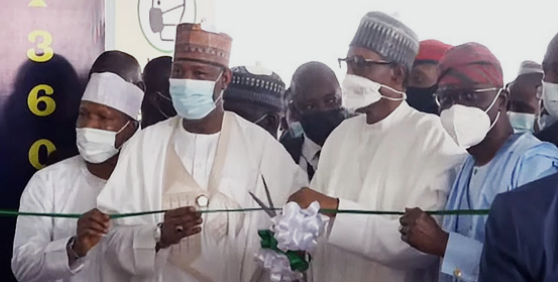 The new MMIA Terminal is expected to handle 20 million passengers a year.

The terminal also has about 60 sets of check-in counters and six boarding bridges.

The terminal is one of five being built in Lagos, Abuja, Port Harcourt, Kano and Enugu, in a bilateral arrangement between the Nigeria and China.

The new terminal is built on a land mass of approximately 56,000 square metres.

The new terminal is expected to generate about 3,000 direct and indirect employment for Nigerians, as well as enhance passenger facilitation and comfort at the Lagos airport.

The Federal Airports Authority of Nigeria will also sign a memorandum of understanding with the Lagos State Government on the 9km Airport-Shasha-Alimosho link Road to be constructed by the State Government.

‘World class infrastructure’
“It is with great pleasure that I am here today to perform the official commissioning of the newly constructed terminal building at the Murtala Muhammed International Airport Lagos,” the President said at the terminal commissioning on Tuesday.

“This event is an eloquent testimony to the strong commitment of our administration to the development of world class infrastructure across all sectors of the Nigerian economy.

“Our continuous investment in the building of long-lasting infrastructure in the aviation sector, road and rail transportation, agriculture, telecommunications and other critical sectors is yielding massive results and the people of Nigeria are now increasingly attesting to the benefitting from the associated dividends.

“Starting from the year 2015 when we commenced our first tenure in office as government, we have been deliberate and consistent in identifying and investing in critical projects that will improve the standards of living of our people as well as contribute immensely to our growth and development as a nation.

The new terminal at the Murtala Muhammed International Airport in Lagos is expected handle up to 20 million passengers annually.

“Despite obvious limitations in terms of availability of resources, our investments in inter-state road connectivity, rail networks, agriculture, power and telecommunication just to mention a few have been unprecedented.

“Bearing in mind the importance of airport infrastructure as a catalyst for economic growth, foreign direct investment and development globally, this administration decided to prioritise the completion and delivery of five brand new international terminals which were at 11 percent completion level when we came into power in 2015. This aligns perfectly with our aviation roadmap which was developed in 2016 for the purposes of establishing critical infrastructure including a national carrier, maintenance, repairs and overhaul centre and improved airport terminals through concession to boost aviation practice and take the industry to the next level reflecting global standards.

“We have also complemented these robust initiatives with specific fiscal policies to drive aviation infrastructure renaissance. This include the designation of four airports name Lagos, Abuja, Kano and Port Harcourt as free trade zones in which Customs duty does is not applied. Removal of VAT on all forms of shared transportation including air transportation and exemption of commercial aircraft and spare parts from VAT payment. Similar projects at both Nnamdi Azikiwe International Airport and Port Harcourt International Airport were completed and commissioned by this administration and our people have since been benefitting from the positive economic impact of these magnificent terminals. The one in Kano has also been completed and will be commissioned soon while work continues to complete that of Enugu shortly. I therefore congratulate all Nigerians on the successful completion and commissioning of the terminal building of the Murtala Muhammed International Airport Lagos, our premier airport.”