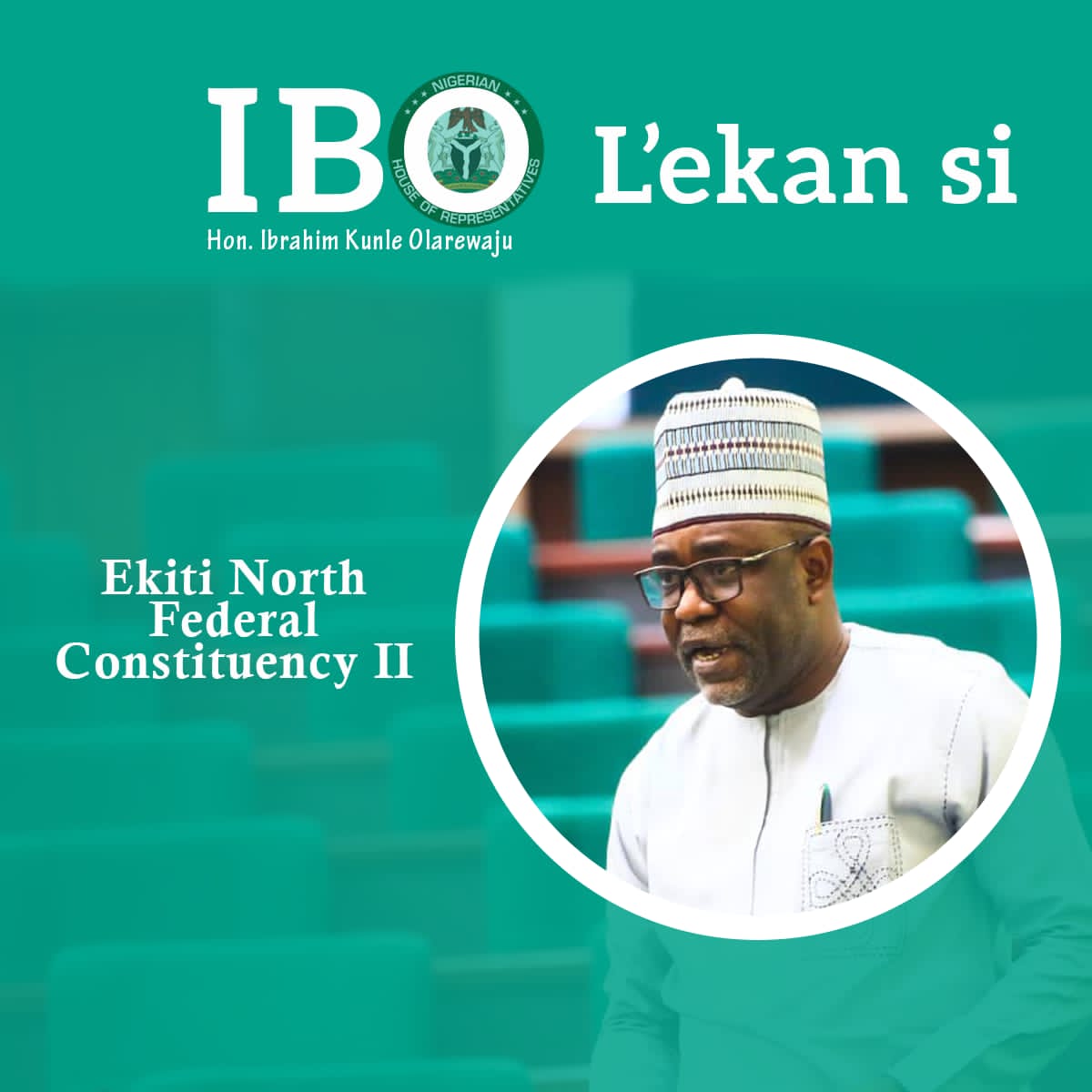 YOU DON’T CHANGE HORSES IN THE MIDDLE OF THE RACE

It is dangerous or inadvisable to choose or back a different political figure for an election into a position that is currently being held by a performing occupier!
Whoever does that will be driving back the wheel of progress in that particular concerned constituency and the suffering would be much than it was at the start of the whole journey!

Hon Ibrahim Kunle Olarewaju,the honourable member representing the good people of Moba, Ido osi and Ilejemeje local governments of Ekiti state at the green chamber of the Nigerian National Assembly is a silent achiever,an example of quality representation any constituency desirous of POSITIVE CHANGE should emulate.

He has demonstrated that there can be a better Ekiti North 2 and this has been felt across all the thirty three (33) wards that make up the three local governments he is representing.

Hon. Olarewaju has demonstrated the will and capacity to deserve a second term. He has shown the whole world the reason while Ekiti North Federal Constituency 2 should jettison EXPERIMENTING every four years but to support and encourage the good works he’s doing at the National Assembly for the betterment of all and sundry in the Constituency.

Precisely on February 23,2019, barrister Ibrahim Kunle Olarewaju,popularly called IBO, was elected on the platform of the All Progressive Party (APC) as member to represent Ekiti North Federal Constituency 2 of Ekiti state at the federal house of representatives;
About 3 years ago now.

Upon the official oath taking and inauguration of the 9th National Assembly on June 11,2019,Barr Ibrahim Olarewaju immediately kicks the ground running with his brilliant participation in the sponsoring of bills and contribution to bills sponsored by colleagues.
As a matter of fact,it is on record that Hon Olarewaju remains the only Ekiti born Rep member to have sponsored the highest number of bills since return to democracy in 1999.
Some of the bills sponsored by him include;

—THE BILL FOR THE ESTABLISHMENT OF COLLEGE OF AGRICULTURE TECHNOLOGY,OTUN EKITI.

Hon Ibrahim,asides the above bills,also contributed actively in the process of passage of many other bills on the floor of the house and all these are available on the YouTube for all to watch.

Hon Ibrahim Olarewaju did promised his constituents of the dividend of democracy while canvassing for votes,he had not reneged on fulfilling those promises to put smiles on the faces of the people he will be representing and to move the federal constituency from the moribund state he met it to an enviable height everyone will be proud of.
Just within less than three years as a Rep member, IBO had facilitated the underlisted infrastructure and empowerments across the three local governments of Moba, Ido osi and Ilejemeje that fall within his counstituency;

—On December 9, 2019, Hon. Ibrahim Kunle Olarewaju organisedFree Medical Outreach in his Constituency with the followings successfully carried out by the team of medical expertise that handled the program;

After Carrying out the Medical Exercises, Hon. Olarewaju took up the bills of Cataract and Hernia Surgeries of affected Patients which were later carried out at the Federal Teaching Hospital Ido Ekiti.

—On December 11, 2019, Over 500 Youths were empowered and trained in skills acquisition programs and stipends worth millions of naira was given to all the participants to help them start their Agric business

—On December 26,2021, Hon Olarewaju, in Partnership with National Film and Video Censor Board of Nigeria, organized an empowerment program on Film Censorship, Make up, and set up GRANTS for youths in ILEJEMEJE LOCAL GOVERNMENT. The Event was held at IYE EKITI.

—On February 18, 2021, Hon. Ibrahim Kunle Olarewaju empowered the people of his Constituency by giving out Cash, Vehicles, Motorcycles, Generators, Sowing Machines, Mechanic Equipments, Standing dryers, Spraying Machines,barbing equipment, etc in forms of empowerment in response to the demand of the people of the Constituency.
Same day,he also donated Mini Ambulances (Mobile Clinic) to all general hospitals in the Constituency and the Federal teaching hospital in Ido Ekiti was also given a brand new advance life support ambulance to ease health care services within the area.
The event which was well attended by all artisans,transport unions,okada union,farmers (who are all beneficiaries of this kind jesture) was held at the palace of His Royal Majesty the Oore of Otun Ekiti.

—On 11th of November,2021,over 200 undergraduate students of higher institution of learning across Moba, Ido osi and Ilejemeje local governments were trained on the act of beeds making,each was given a certificate of participation and a sum of #40,000(forty thousand naira) each to help them further their education.

—In December 2021,over 300 gas cylinders,over 20 generator and deep freezer, and over 200 standing fans were distributed to the civil servants across the three local governments that make up his constituency.

In the area of infrastructure, IBO had spread his infrastructure gesture across all the three local governments that make up his constituency.
As a matter of fact, Ekiti North Federal Constituency 2 had never,in the history of representation,witnessed such a facelift in terms of infrastructural development as IBO had facilitated in less than three years in office.
Some of his capital intensive projects are not only visible but verifiable and are as follows;

—In Ilejemeje local government alone,Hon Olarewaju has erected a multi-million naira water borehole at EDA ONIYO EKITI being the request of the community when IBO visited the town for votes campaign.
A giantantic multipurpose hall was recently handed over by IBO to the use of the people of EWU EKITI.
Solar street light have been erected in all the towns of Ilejemeje local government, except IJESHAMODU EKITI which will be due for installation soon.

—In Ido Osi local government,hon Olarewaju had spread his infrastructural development gesture across the length and breadth of the area.
For example, a block of fully furnished six(6) classrooms was recently completed and ready for use at the NOTRE DAME SECONDARY SCHOOL,USI EKITI while that of OGANGANMODU GRAMMAR SCHOOL,IDO EKITI is over 50% completed and will be delivered in due course.
Solar street light have been commissioned in all the towns and villages in Ido Osi local government with exemption of Ifishin and Orin Ekiti which are billed to be erected any moment from now.

—In Moba local government where the seasoned lawyer-turned politician hails from,his performance cut across all the thirteen (13) towns in the local government.
For example,his solar light were visible in all the towns in Moba local government with exception of IRO and IRA EKITI which are still under construction.
A 1km asphalt road was commissioned last year in OTUN EKITI while a 0.5km surface road dressing was done just beside the palace of Oore of OTUN EKITI recently.
Hon Ibrahim has installed a multi-million naira solar borehole in OSUN EKITI and two at OTUN EKITI.
He has installed two electricity transformers in OTUN EKITI.
A block of three (3) classrooms is under construction at MOBA GRAMMAR SCHOOL OTUN EKITI.

Judging from the above eloquent and robust representation coupled with the verifiable evidences of performance across Moba, Ido Osi and Ilejemeje local governments under the competent representation of Barr. Ibrahim Kunle Olarewaju,it will be unthinkable,or better still, inadvisable to change the goalpost midway into the match!
If the general saying “good turn deserves another” is anything to go by,then,Hon Ibrahim Kunle Olarewaju should not only be encouraged,he should be supported by all and sundry to continue the fantastic works he’s been doing since taking oath as a Rep member.

Another reason Ibrahim must be allowed a second chance is the fact that he will be returning as a RANKING MEMBER if he eventually wins the 2023 election, rather than a first timer he currently is.
The implication is that he’ll have the opportunity to chair a committee and also have the opportunity of being a principal officer at the green chamber.
What this means is that if he can do all what he has done in less than three years in office as just a first timer, he will definitely lift many more people out of poverty and put more smiles on the faces of his constituents if he can be returned to continue his good deeds.