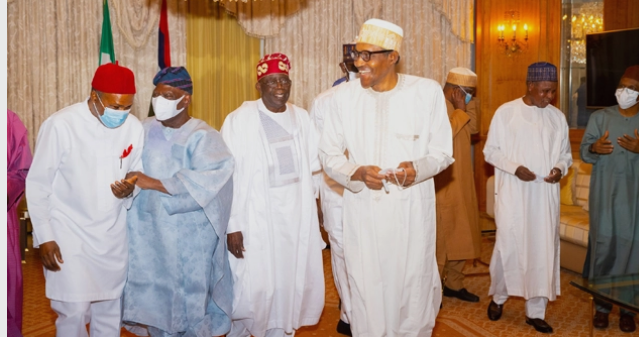 African leaders on Monday gathered at the Olusegun Obasanjo Presidential Library (OOPL) for a high-level dialogue on the challenges facing democracy in West Africa.

The two-day dialogue, which was declared open by Vice President Yemi Osinbajo, was also attended by former President Goodluck Jonathan.

The duo of Osinbajo and Jonathan were received by former President Olusegun Obasanjo, who hosted other leaders of the continent.

The event was put together by the Coalition for Dialogue on Africa (CoDA), an organisation chaired by Obasanjo himself.

Others at the event included former President of Sierra Leone, Ernest Bai Koroma and Prof. Abdoulaye Bathily, Governor Dapo Abiodun of Ogun State and others.

Journalists were barred from covering the main dialogue as the few who were allowed to cover the opening ceremony were later asked to step out.

Many had speculated that the invitationon of Osinbajo by Obasanjo to declare the programme open may not be unconnected with his rumoured 2023 presidential ambition.

Some supporters of the Vice President had mobilised to OOPL venue of the event, carrying banners to declare their support for Osinbajo, especially to plead with him to declare his ambition as early as possible.

But, Obasanjo approached the people, telling them Osinbajo was not in the Ogun State capital for politics, but for a dialogue on Africa development.

He asked them to lower their banners, urging them not to turn the premises to a campaign ground.

While declaring the dialogue open, the African leaders expressed worries that West Africa and indeed Africa are currently going through a perilous storm following political instability in some parts of the continent.

Speaking on the theme, ‘West Africa: Rising To The Challenges of Consolidating Democratic Governance’, the leaders condemned military take over of democratically elected governments in some African countries, saying democracy in West Africa and indeed Africa requires urgent attention.

They lamented that, coup d’etat, election fraud and political violence and instability have crippled the growth of Africa, calling on military leaders to desist from truncating democracy in Africa.