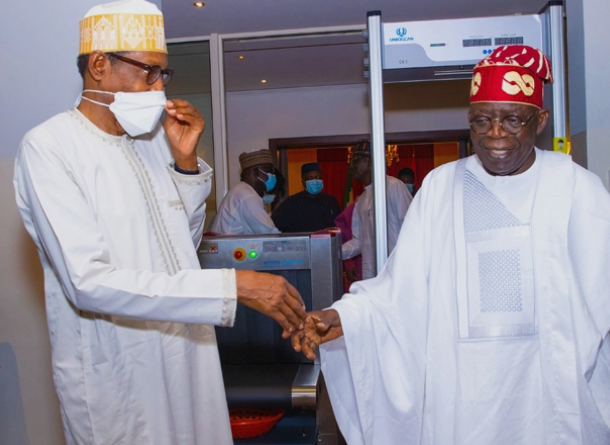 The President birthday message was contained in a statement by his Special Adviser on Media and Publicity, Femi Adesina, titled ‘President Buhari hails Asiwaju Bola Ahmed Tinubu at 70.’

Buhari affirmed the contributions of the party stalwart to the political, economic and social development of the country, setting a standard in leadership, governance and philanthropy.

The President saluted Tinubu’s “courage, resilience, selflessness and nobility in always placing the welfare and unity of the nation above self.”

These actions, he noted, are backed with a vision of a greater Nigeria through investments in people, institutions and governments, without minding tribe or creed.

Buhari said he joined family members, friends, business and political associates in celebrating the septuagenarian, who has diligently and progressively risen on the nation’s political ladder since 1992, fighting for democratic rule against many odds, angling for people-focused development and supporting visionary and purposeful leadership.

The Senate President described Tinubu, a national leader of the All Progressives Congress, as an astute administrator who laid a solid foundation for the modernisation of Lagos State, and a visionary political leader with a track record of building people and organisations.

Lawan said this in a statement issued on Monday by his Special Adviser on Media, Ola Awoniyi, titled ‘You are a leader of leaders, Senate President hails Asiwaju Tinubu @70.’

He said, “Asiwaju Tinubu has lived a life of service, impacting many lives in several decades of active political participation and public service. This has made him a political pathfinder, leader of leaders and a legend in his own lifetime. Today, he is not just a principal actor in Nigerian politics, but also one of the main issues.

“I wish the Jagaban Borgu a happy birthday and many more years of impactful service to our beloved fatherland, Nigeria, and its great people.”

Ekiti State Governor and Chairman, Nigeria Governors’ Forum, Dr Kayode Fayemi,  in a statement by his Chief Press Secretary, Yinka Oyebode, titled, ‘Fayemi congratulates Tinubu at 70’, described the APC leader as “a celebrated democrat, pragmatic leader and visionary statesman who has an insatiable appetite for championing good causes in pursuit of a better Nigeria”.

The governor noted that “Tinubu played pivotal role in the fight against military dictatorship, de-annulment of the June 12, 1993 presidential election and has continued to play significant roles in sustaining the current democratic experience in the country”.

He described the presidential hopeful as “a dogged fighter in the causes he believes in,” adding that the former Lagos Governor had, through his actions and engagements, inspired many to stand up and be counted in the areas of political participation and excellent service  delivery.