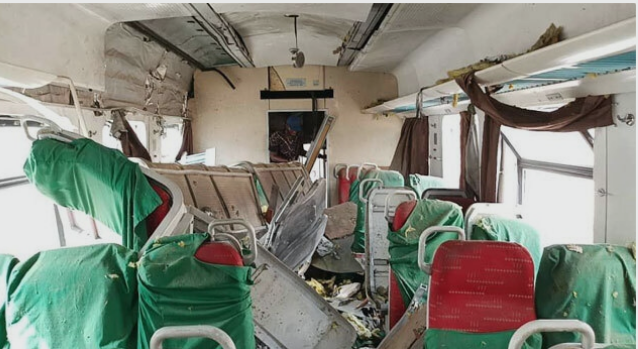 The Nigerian Railway Corporation (NRC) has said 21 passengers are still unaccounted for following the attack on an Abuja-Kaduna-bound train about a week ago.

This is according to a statement issued on Sunday by the Managing Director of the NRC, Fidet Okhiria.

“From the last press release, we confirmed that 4 No. Coaches (SP 00004, SP 00009, SP00012, and SP000I3) out of the 11 No. Coaches involved in the incident have been rerailed and safely moved to Rigasa Station while work is ongoing on track repairs. We did also state that 170 of the passengers on-board the train are safe while 21 passengers are reported missing,” the statement read.

“This brings the total coaches so far rerailed to 7 No. but only 5 No. successfully moved to the stations. However, efforts are on to link the track. At the moment, a total of 80 meters of the affected section has been fixed including replacement of affected sleepers and twisted rails”

According to the NRC boss, two more persons have returned home, taking the number of safe passengers to 172. He said attempts are being made to reach the remaining numbers on the manifest.

“Once again, the Corporation deeply condoles with those who lost loved ones and pray for the repose of the lost souls,” he said in the statement.

“We equally sincerely sympathise and empathise with our injured passengers and indeed everyone on board the AK9 train of Monday 28th March 2022 for the trauma this unfortunate incident has caused you.”

Okhiria also lauded security agencies for their cooperation and support following the attack.