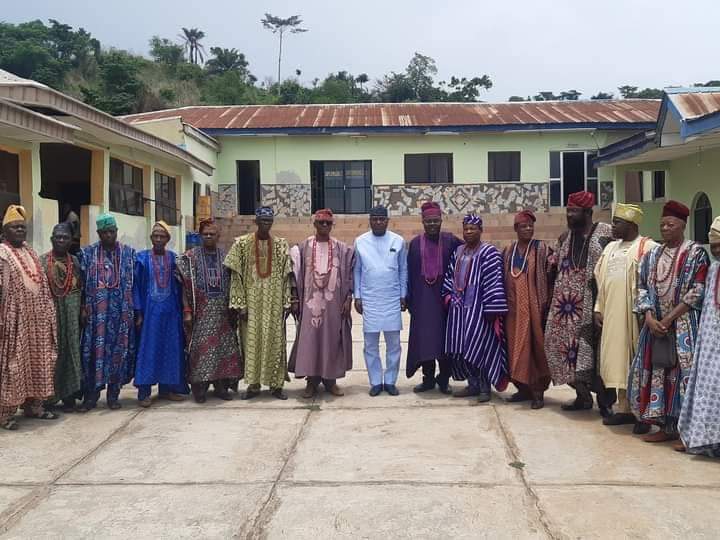 The Biodun Oyebanji campaign receives a major boost on Tuesday as Ekiti state council of Chiefs drums support for his candidature and the ruling party, the APC.

The campaign organisation recieved the boost after an interactive session between the APC standard bearer and the Council chiefs in Ado-Ekiti, the state capital.

According to The Chairman of the council, Chief Olu Ogunsakin, the Asolo of Ikole, he expressed great joy in the candidature of Mr. Biodun Oyebanji. The Asolo described Oyebanji as a man who operated an open door policy while serving the state as Secretary to the Government

“We are happy to recieve you. Before your ambition, I don’t spend two minutes before we see you while you served as SSG. You operated an open door policy.”

The Asolo further described the State Government under the leadership of Dr. Kayode Fayemi as a visionary who has brought invaluable support for the people of Ekiti state noting that the government has been of great help to their association since his first stint.

“There is no town in Ekiti that this present administration impact is not felt. Dr. Kayode Fayemi is a visionary leader in Ekiti State. He has been able to draw more development partners to the state. This government of Governor Kayode Fayemi has played a pivotal role in our association. The government gave us financial support, lands and a bus for the day to day activities of this association. And that’s enough reason to support you after having served in the last government as SSG. We are not only going to support you, we will work for you. We are not in conflict with our royal fathers but we will do all in our best to see that you become winner. What we are asking is that you do not forget us.” The chief Said.

Responding, Mr. Oyebanji appreciates the support from the chief council. Acknowledging the huge support from the council chief, he said he has not kick start the campaign properly because he is talking and meeting with traditional rulers in the state

” I am talking with our traditional rulers to seek their prayers and support for the campaign ahead. We have visited some royal palaces and we are still moving to some”

“I am not afraid because I have people like you as my support system. You are the original owners of Ekiti. I was only doing my own during the struggle for the creation of the state as young man who is interested in seeing Ekiti development. Never knew I was going to come contest for the governorship seat today. But I am grateful to God for the Kings and all their subjects. There is no king in Ekiti who didn’t go through one struggle or the other during the fight for the creation of the state and if we were not successful then, people like us would not be able to come out to contest for the governor’s seat. If you are not behind the kings, all these would not have been successful. I remember very well your contributions then and I promise not to dissapoint you.” Oyebanji said.