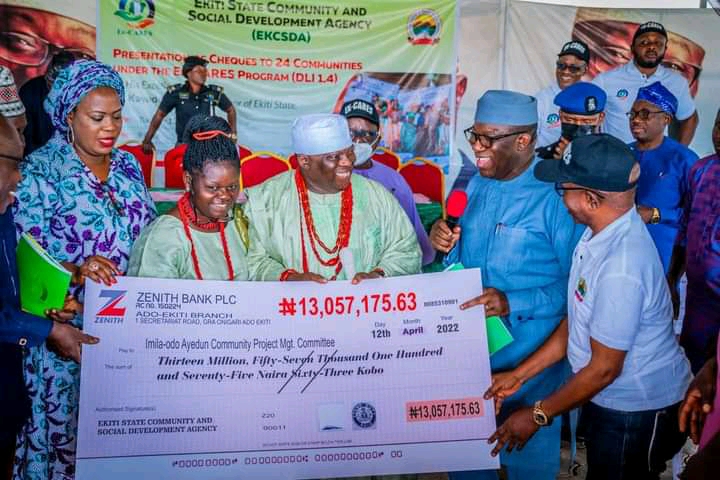 Governor Kayode Fayemi of Ekiti state has distributed cheques worth N360 million to 24 communities , as part of efforts to cushion the effect of COVID-19 pandemic on the poor and vulnerable as well as ensure reduction of poverty to the barest minimum.

The governor presented the cheques yesterday to representatives of the communities at the Osuntokun Hall, Government House, Ado-Ekiti.

He said any government able to cover the three critical areas would have gone a long way in reducing poverty to its barest minimum, adding that the fund was in fulfilment of his promise and commitment to ensuring that every community got a taste of the administration’s development agenda.

The governor said the government was determined to make impact in the lives of the people.

According to the governor, Ekiti State COVID Action Recovery and Economic Stimulus (Ekiti CARES) programme was the aftermath of how the state was looking at ways to alleviate the effect of COVID-19 pandemic on the socio-economic well-being of the people and support budgeted government intervention at the state level, targeting existing and newly vulnerable and poor households like farmers, artisans and micro and small scale enterprises affected by the economic crises occasioned by the pandemic.

Fayemi urged all the community project management committees to be more active and accountable to their community as well as ensure that sustainable plans were put in place for the use and maintenance of the projects. He enjoined them to be more committed and selflessL while discharging their assignments

The Ekiti CARES intervention programme is an extension of the NG CARES, which is an emergency programme aimed at supporting state level efforts to respond to and recover from the COVID-19 induced socio-economic crisis.

“The Community Infrastructure Services for communities which have been the key delivery areas of Ekiti State Community and Social Development Agency (EKCSDA) for over 10 years, has completed all the processes of facilitating 24 Communities/Group Development Projects amounting to about Three Hundred and Sixty Million Naira (#360,000,000) for the provision of infrastructural facilities in three result areas of education, health care services; water and sanitation.

“This was made possible as a result of Five Hundred and Fifty Million Naira (#550,000,000), which was released in November last year by our administration as an advance to kick start the programme in Ekiti State, which is why Ekiti is the only state as of today to achieve that feat out of the 36 states of the federation. This is not by happenstance but in fulfilment of our promise and commitment to ensuring that every community in Ekiti State has a taste of our developmental agenda.”

Projects to be implemented by these communities include construction/ renovation of basic health centres, blocks of classrooms and provision of water from motorised boreholes, among others.

The event was attended by the Deputy Speaker, Hakeem Jamiu; Acting Secretary to the State Government, Mr. Foluso Daramola; Head of Service, Mrs. Peju Babafemi; Chief of Staff to the Governor, Mr. Biodun Omoleye; Chairman, Board of EKCSDA, Chief Biodun Akin-Fasae and traditional rulers of the benefiting communities, among other dignitaries.