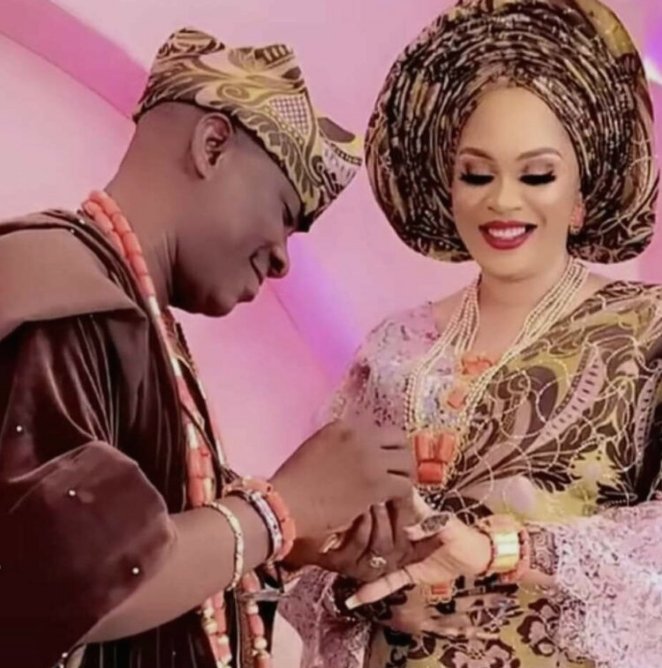 A Nigerian Fuji music legend, Wasiu Ayinde popularly known as KWAM 1, has rubbished reports that he was slapped by his new wife, Emmanuella Ropo, over infidelity allegations.

Wasiu issued the disclaimer via his media advisor, Kunle Rasheed.

A popular gossip blogger had alleged that the famous singer and his wife, Emmanuella, had an altercation that became physical.

The blogger had also alleged Emmanuella accompanies him to his official engagements and distracts the Fuji lord on such occasions.

Reacting to the allegations, Mr. Rasheed said: ‘‘Mrs Emmanuella Ropo Marshal is very busy with her wifely duties than to follow the fuji lord to his official engagements. In recent times, the only party she has attended with her husband was the one held in GRA Ikeja Lagos when a top society buff who is a common friend of the couple celebrated his 60th birthday’’.

His statement partly read: ‘‘The said blogger had gone on social media, to allege that Fuji king and Mayegun of Yorubaland, K1 de Ultimate had quarreled with his new wife Emmanuella Ropo Marshal and that the lady had even slapped the fuji king during the said altercation.

“Ordinarily, we would not have bothered to exchange words with this barefaced liar who chooses the holy month of Ramadan to tell hideous lies.

“We merely want to state that at no time did the Mayegun quarrel with his wife Ropo to the extent of her raising her hands on him. We are shocked that such an allegation can be thrown so casually.

“We make bold to say that this allegation is malicious and shudder even more than it could be peddled during Ramadan. Therefore, let the evil peddlers repent and seek the face of Allah for forgiveness’’.

Wasiu Ayinde and Emmanuella got married at the Palace of the Alake of Egbaland, Ake Abeokuta, in November 2021.

It was the first time the Fuji maestro would stage a wedding this grand and public.

Emmanuella is also the only woman he has ever shown off and eulogized on social media.