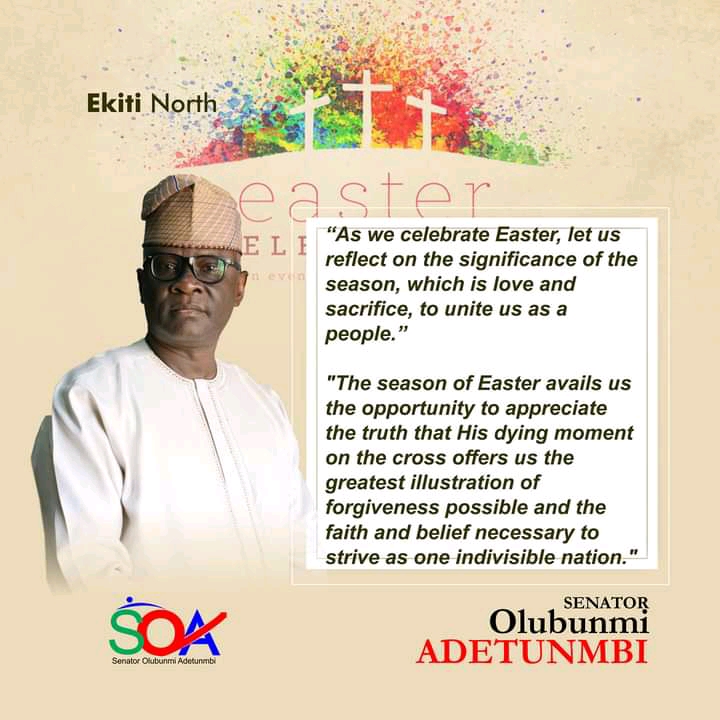 The Senator representing Ekiti North Senatorial District, Senator Olubunmi Adetunmbi, has called on Christians and Nigerians from all walks of life to use the season of this Easter celebration to reflect on its significance in the life of the nation.

Senator Adetunmbi noted that it would be tantamount to hollow ritual if the significance of the celebration was not underscored by appreciating the sacrifice, death on the cross and the resurrection of Jesus Christ with its central theme on sacrifice.

The lawmaker made the call in a message to mark this year’s Easter celebration which, he said, formed the hallmark of Christendom ‎and Christianity. He urged Christians to not only use the opportunity of the celebration to rededicate themselves to the values of love, peace, sacrifice and tolerance as embodied in the death of the Saviour, Jesus Christ, but to also renew their faith in their leaders.

According to Senator Adetunmbi, “As we celebrate Easter, let us reflect on the significance of the season, which is love and sacrifice, to unite us as a people.”

“The season of Easter avails us the opportunity to appreciate the truth that His dying moment on the cross offers us the greatest illustration of forgiveness possible and the faith and belief necessary to strive as one indivisible nation.”

While urging moderate celebration, Adetunmbi noted that “the import of Christ’s resurrection was not to engage in wild and elaborate celebration but to give our lives meaning and direction and the opportunity to close ranks, no matter our differences and circumstances.”

While wishing the country peace, love and the warmth of friendship, Adetunmbi enjoined Nigerians to eschew hate and bigotry, which was what Christ preached against before His ultimate price on the cross.