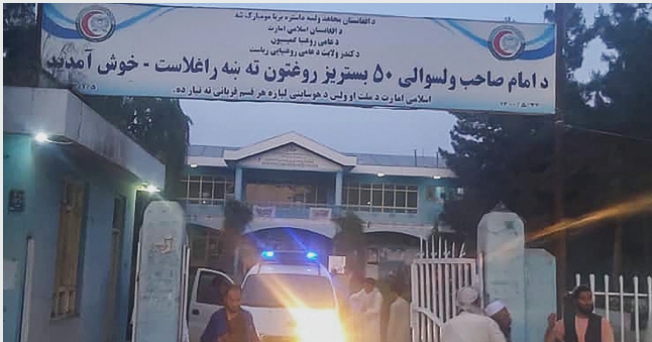 Since Taliban fighters seized control of Afghanistan last year after ousting the US-backed government, the number of bombings has fallen but the jihadist and Sunni IS has continued with attacks against targets they see as heretical.

A string of bombings rocked the country this week, with deadly attacks targeting a school and a mosque in Shiite neighbourhoods.

Taliban government spokesman Zabihullah Mujahid tweeted that children were among the 33 dead in the blast on Friday at a mosque in the northern province of Kunduz.

“We condemn this crime… and express our deepest sympathies to the bereaved,” he said, adding 43 more were wounded.

Images posted to social media — which could not be immediately verified — showed holes blown through the walls of the Mawlavi Sikandar mosque, popular with Sufis in the Imam Sahib district, north of Kunduz city.

Jihadist groups such as IS bear a deep hatred for Sufis who they view as heretics and accuse them of polytheism — the greatest sin in Islam — for seeking the intercession of dead saints.

“The sight at the mosque was horrifying. All those who were worshipping inside the mosque were either injured or killed,” Mohammad Esah, a shopkeeper who helped ferry victims to the district hospital, told AFP.

Relatives of victims were arriving at hospital to look for their loved ones.

“My son is martyred,” screamed a man, while a woman accompanied by her four children searched for her husband.

A nurse told AFP over the phone that between 30 to 40 people had been admitted for treatment of wounds from the blast.

Kunduz police said they were investigating the type of explosion.

Friday’s blast was one of the biggest attacks since the Taliban seized power in August last year.

In October, a suicide attack at a Shiite mosque, also in Kunduz, killed at least 55 people and wounded scores — an attack also claimed by IS.

The regional IS branch has repeatedly targeted Shiites and minorities like Sufis in Afghanistan.

IS is a Sunni Islamist group like the Taliban, but the two are bitter rivals.

The biggest ideological difference between the two is that the Taliban sought only an Afghanistan free of foreign forces, whereas IS wants an Islamic caliphate stretching from Turkey to Pakistan and beyond.

Friday’s blast comes a day after IS claimed a bomb attack at a Shiite mosque in the northern city of Mazar-i-Sharif that killed at least 12 worshippers and left 58 people injured.

They also claimed a separate attack in Kunduz city on Thursday, which killed four people and wounded 18.

No group has yet to claim twin blasts on a boys’ school in a Shiite neighbourhood of Kabul on Tuesday, which killed six and wounded more than 25.

Shiite Afghans, who are mostly from the Hazara community, make up between 10 and 20 percent of Afghanistan’s population of 38 million.

Sufis, also a minority in Sunni majority Afghanistan, have faced several attacks in the past. In November 2018, a suicide attack at a wedding in Kabul killed dozens, most of them Sufis.

Earlier on Friday, the Taliban authorities said they had arrested the IS “mastermind” of Thursday’s bombing at the mosque in Mazar-i-Sharif.

Taliban officials insist their forces have defeated IS, but analysts say the jihadist group is a key security challenge.