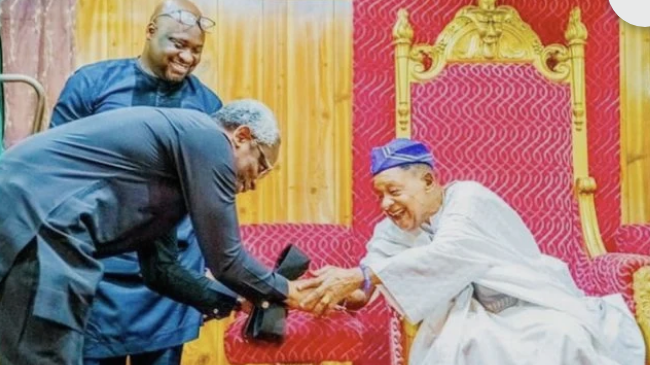 The installation of the Speaker of the House of Representatives, Femi Gbajabiamila, as the Aare Baasofin of Yorubaland (the Supreme Lawmaker of Yorubaland) has been suspended.

This was announced in a statement by the Special Adviser on Media and Publicity to the Speaker, Lanre Lasisi, on Sunday.

Lasisi said the event, which was planned to take place on Friday, May 27, 2022, was postponed over the death of the Alaafin of Oyo, Oba Lamidi Adeyemi III.

Recall that Alaafin died 35 days to Gbajabiamila’s chieftaincy conferment ceremony, which was part of activities to mark the lawmaker’s 60th birthday.

Gbajabiamila was conferred with the traditional title of Aare Baasofin of Yorubaland (the Supreme Lawmaker of Yorubaland) by the late Alaafin of Oyo, Oba Lamidi Adeyemi, in September 2021.

An invitation card of the event that surfaced online shows that the installation is slated to take place on Friday, May 27, 2022, with the All Progressives Congress’ presidential aspirant, Bola Tinubu, named as the Chairman of the occasion.

Also, the Ooni of Ife, Adeyeye Ogunwusi, was slated to be the Royal Father of the Day while Chief Commander, Ebenezer Obey and K1 De Ultimate have been named as the musicians to entertain guests at the event.

Lasisi in the statement explained that the monarch died before the distribution of invitation cards for the event.

The statement read, “You will recall that his Royal Highness, the late Alaafin of Oyo, Oba Lamidi Olayiwola Adeyemi III communicated the conferment of the title of Aare Baasofin of Yoruba Land to Speaker Femi Gbajabiamila through an appointment letter dated September 7, 2021, and presented to the Speaker on Thursday, September 30, 2021, at the National Assembly, Abuja, by members of the Oyomesi Council led by the Bashorun of Oyo Kingdom, High Chief Olayinka Ayoola, who is the traditional Prime Minister of Oyo Kingdom and Bishop Ayo Ladigbolu.

“Upon which the Speaker, in turn, accepted the appointment with gratitude to God. However, due to the tight work schedule of the Speaker, the Chieftaincy ceremony could not hold throughout 2021, until this year when the date of May 27, 2022, was agreed with the palace but as God in his majesty will have it the revered monarch passed on Friday night before the distribution of Invitation cards for the event (May Allah grant him Aljanah Firdaus).

“Naturally, the event can no longer hold as the Speaker, the entire Yoruba race, Nigerians home and abroad mourn the demise of the widely respected Monarch.”