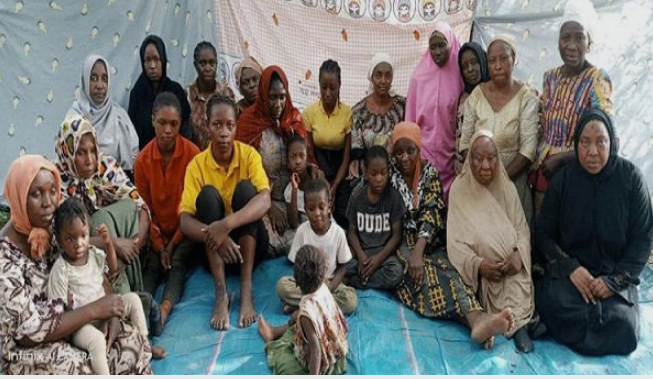 The terrorists who attacked an Abuja-Kaduna train on March 28 yesterday released four photos of their captives.

In the photos, 62 of the kidnapped victims are seen in four groups.

The first photo has 23 persons, including five children (two females and three males) and 18 women.

Among them is the 85-year-old woman said to be diabetic.

The third photo shows six of the victims sitting, one of whom has a bandage wrapped on his right leg.

It is the third time the terrorists would release evidence that their captives are alive.

The first photo was released during the release of Managing Director of Bank of Agriculture, Alwan Ali-Hassan.

The other was a video showing victims begging the government to grant the terrorists’ demands.

It was reported after the attack that 68 captives were with the bandits, including 41 women, 22 men and five children.

The Nigerian Railway Corporation (NRC) is unsure of the exact number of those abducted.

The terrorists used clothes to block the background on the photographs as the abductees sat on a tarpaulin.

They blew up rail tracks on the Abuja-Kaduna route during the attack, killing eight passengers. No fewer than 41 people were injured.

Ali-Hassan, who is the only released captive released so far, had told those who visited him that they were subjected to five days of trekking from the attack scene to a forest in Shiroro Local Government Area of Niger State.

A victim’s relative who visited Ali-Hassan had said: “He assured us that, all our loved ones were fine.

“He said after being driven from the scene of the attack for several kilometres into the bush, the bandits dropped them and made them to trek from that point.

“He said they had stopovers at several transit camps of the bandits; that at every point, they would think they had gotten to their destination, but they would just command them to start trekking again.

“He said they moved for five days before they arrived at the terrorists’ main camp somewhere in the forest around Shiroro Local Government Area of Niger State.

“He also told us that the terrorists had medical personnel and they brought them to the camp to treat victims who got injured either from the scene of the attack or during the journey to the terrorist camp.”

There were speculations that two expectant mothers among the victims, including a lady said to be due for a caesarean section (CS), were delivered of their babies, but this could not be independently confirmed.

Premium Times spoke to family members who confirmed that those seen in the photographs were their relatives.

President Muhammadu Buhari had ordered security agencies to secure the release of all those in captivity.