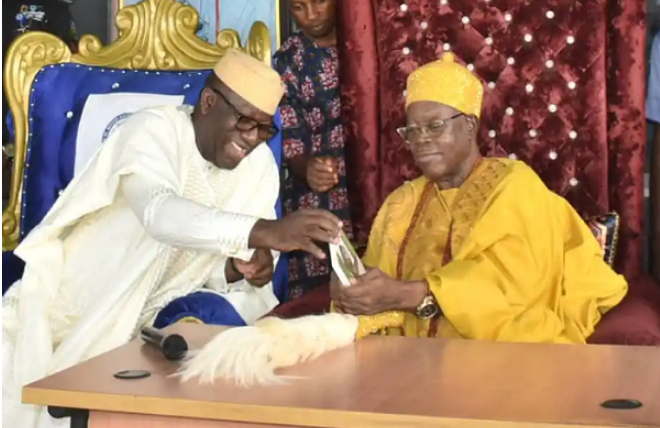 The Olubadan of Ibadanland, Oba Lekan Balogun, has described Ekiti State Governor Kayode Fayemi as an honest and straightforward person.

Fayemi got the commendation yesterday when he visited Alarere, Ibadan home of the monarch, where he was received by members of Olubadan-in-Council, the senator representing Oyo South, Dr. Kola Balogun, Baales and the President-General of the Central Council of Ibadan Indigenes (CCII), Prince Oluyemisi Adeaga.

It was in continuation of the governor’s consultation on next year’s presidency.

Oba Balogun, who said the manner of delivery of the two-term governor and former minister of mines showed “the kind of person you are, your ideological orientation, your disdain for self-interest and pursuit of national interest.”

The monarch said: “You have the capacity to contribute to the growth and development of the country. You have been contributing to the country; you are honest and not given to telling lies. Your pursuit of national interest is acknowledged and you spoke like a gentleman, which truly you are.”

Asking the people “to consider him very seriously”, Oba Balogun said: “Rally round him, I beg you in the name of God. That’s the picture of him that I have. He’s an honest person, straightforward. God is behind you. Thank you, my people”.

Fayemi, the chairman of the Nigeria Governors’ Forum (NGF), said the visit was to pay obeisance to the Olubadan, having been unable to visit the monarch since his coronation at Mapo Hall last month; and to seek his counsel, prayer and support for his desire for the nation’s top job.

He said: “Mine is not an ambition, but a call to duty to build a better Nigeria. Although our youths may want to give up on Nigeria due to a lot of justifiable reasons, I believe Nigeria is still worth fighting for. I don’t think the Yoruba want to do away with Nigeria.

“What I believe we want is peace, progress and development of the country. That’s what our fathers clamour for. The Yoruba believe in value of equity, justice and fairness. The Yoruba don’t want to enslave others and they don’t want to be enslaved either.

“Having supported many in the past to get to the apogee, I consider it is time to look in our direction. We have sons and daughters imbued with what it takes to give the country the desired leadership. I have been consulting and it was the consultation process that brought me before Your Imperial Majesty as the father of politicians.”

Ekiti Cargo Airport To Be Delivered Before I Leave Office, Says Fayemi