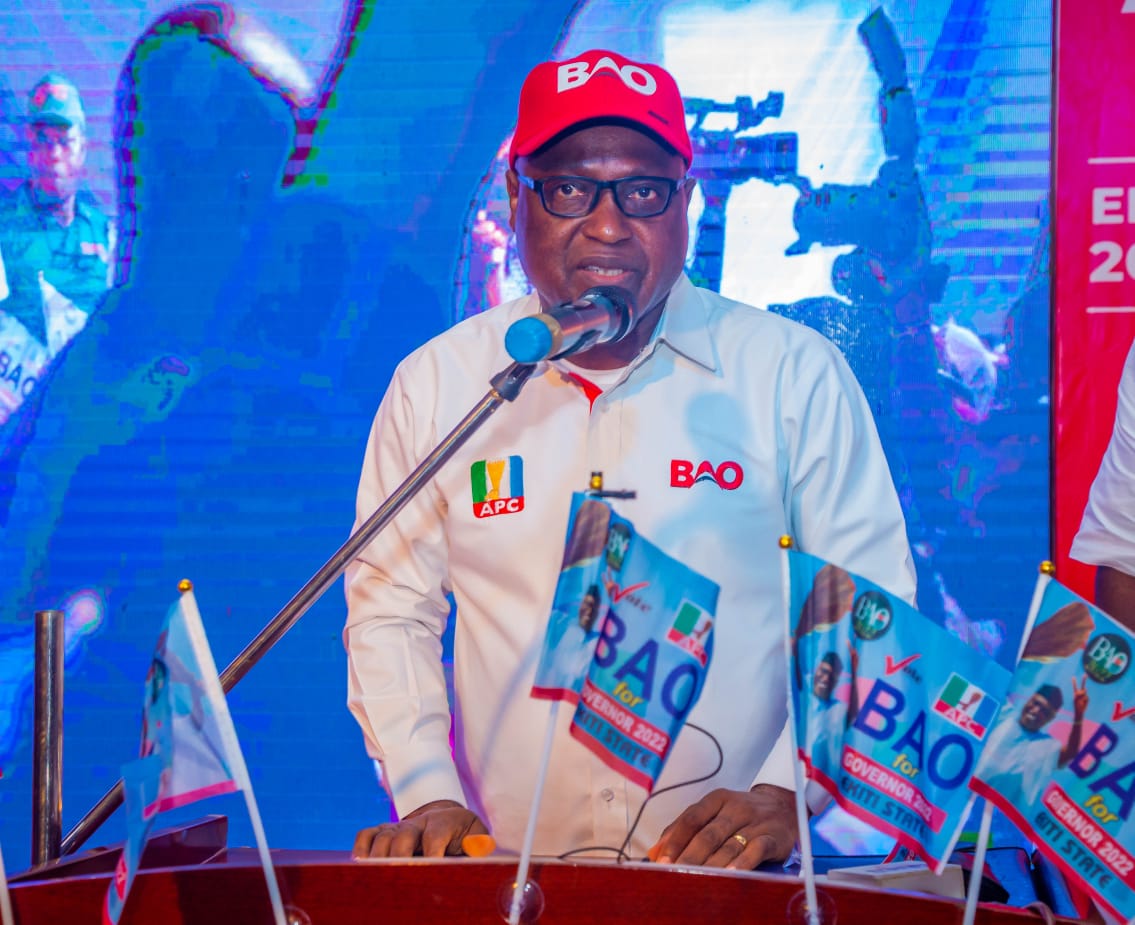 Support grew yesterday for the governorship candidate of the All Progressives Congress (APC)  in the June 18 poll, Biodun Abayomi Oyebanji (BAO), as the leadership of the Labour movement in Ekiti State Local Government service under the aegis of the National Union of Local Government Employees (NULGE)  pledged to support all activities that will sustain the new lease of life being enjoyed by workers under the administration of Governor Kayode Fayemi in Ekiti State.

According to them, this can only be achieved by supporting Oyebanji as Fayemi’s successor, as the governor has laid a solid foundation for sustainable growth through many life-lifting schemes.

NULGE President, Babatunde Olatunde, in an interactive  session with the leadership of Ekiti State Local Government Service Commission also attended by the Heads of Local Government Administration,  Directors of Administration  Directors of Finance and other senior officers across the 16 local governments and 19 Local Council Development Areas (LCDAs) at NULGE House, Ado-Ekiti, said Ekiti local government workers had enjoyed a rare industrial harmony and professional growth since Fayemi came on board in 2018.

Olatunde said workers would support Oyebanji, who, he said, had the same focus as Fayemi in his campaign policy statement. He urged his colleagues to preach “the Oyebanji gospel” among workers and other voters  in their communities.

Stressing that workers had a duty to support the government of the day, he praised Fayemi for fulfilling his electoral promises to local government workers, saying that the gesture is not what workers would gamble with as succession election holds on June 18, 2022.

Warning against the danger of reversing the gains made by Fayemi’s administration like was the case in 2014 when the Local Council  Development Areas created by Fayemi were cancelled by former Governor Ayodele Fayose and all promotions that went with it were reversed, Olatunde said local government workers had learnt a bitter lesson through that unfortunate reversal of fortune.

“Never again! We will not allow anybody that we cannot ascertain his sincerity to deceive us and later destroy our future. We trust Fayemi’s administration and whatever his administration stands for. This is not about playing politics. This is about our future. Even if it is about playing politics, the Nigerian Law supports us. That is why we have Labour Party in Nigeria. It is workers’ party.

“We can’t afford to place our hopes on promises by other candidates, which fruits we have not tasted. We have tasted both Fayemi’s promises and their goodies and we have decided to stay with that stream to grow professionally to enhance our living conditions,” he explained.

At the meeting also attended by the Chairman of the Local Government Service Commission, Samuel Abejide,  and his Commissioners, the Commission boss said there was no promise made to local government workers during campaign in 2018 that has not been fulfilled by Fayemi, noting that the lapses created by former administrations were faithfully redressed to give a new face to the local government system in terms of welfare, professionalism and career growth like never before.

Abejide told the gathering that Oyebanji would sustain that legacy of keeping campaign promises and urged workers not to miss the opportunity.

NULGE representative in the Commission, Comrade Segun Onaade, took the officers back to history, explaining that all workers’ agitations and demands that could not be addressed in eight years when he was State President of NULGE had been addressed by Fayemi’s administration in three years.

Regretting that the past administration denied them career progression in the service, Onaade urged the officers to be focused, and remain loyal to the system that placed premium on their progress, even as he asked the officers to support Oyebanji at polls to ensure continuity of career growth and improved conditions of living in their homes.

Speaking on behalf of other officers, Ayodeji Aluko and Sesan Aina, who warned against trial and error syndrome among workers in election year, spoke in the same vein, stressing that workers would not lose focus again in ensuring the sustenance of a service that holds great promise for their future.

Other Commissioners in attendance included Otunba Bisi Dada and Barrister Dele Oloje. Dada urged the workers to remember the past, as the same politicians that planned to sack 2,000 local government workers through Captain Consult report and denied them several benefits are on the field again canvassing for their votes.

Urging workers to hold steadfast and trust the present dispensation that had greatly improved their lot,  Oloje listed the achievements posted by the commission in three years. These, he said, include regular payment of staff salaries while government is making efforts to clear the arrears owed by the previous administration.

Assuring that promotion letters would be released in a matter of days, he listed other achievements as Promotion/Advancement/Absorption/Conversion of 3, 552 staff in the 2020/2021 promotion exercise; Directorisation of Cadres in line with the Approved Scheme of Service for Local Government Employees (2006 Edition);  deployment of staff to the Local Council Development Areas, which he said had given opportunities to many officers to hold functional posts,  such as  Directors/HoDs, Deputy Directors, Sectional Heads, Paymasters and  harmonization of Local Government Laws.

Others include creation of additional departments, such as Water, Sanitation and Hygiene (WASH), Procurement, Audit, Information, and Legal Services, which, he said, had reached advanced stage of conclusion.

He added: “The Commission carried out migration of officers to the Procurement Officers’ Cadre; harmonisation of Nursing Officers/Nursing Assistants and Chief Matrons’ Cadre GL. 14 to Assistant Directors’ (Nursing); approval of Nurses’ careers to the Directorate Cadre while some nurses have been promoted either to the rank of Director of Nursing Services or Director of Health Education, Grade Level 16.

“We also have elevation of CHEW/CHO, GL. 14 to Deputy Directors (Community Health) Cadre GL.15; regular payment of pensions and gratuities with N943,195,825.94  already paid as gratuity to retired local government staff and primary school teachers between October 2018 to date; and upgrade of the Local Government Staff Training School to Ekiti State Institute of Local Government Studies, Ilawe-Ekiti, a diploma-awarding institution.”

Also on the list is capacity building with the regular training of workers to equip them with knowledge and skills needed to discharge their duties effectively while 2019 and 2020 Annual Reports were timely produced unlike in the past, even as the commission resolved many knotty personnel issues, all in favour of staff.

The Permanent Secretary, Tayo Olauyi,  said he was proud to be part of the Ekiti State local government reform history that had placed the system as one of the best in the country.

He praised Fayemi for approving the latest recruitment of 300 junior and senior staff to the local government service, saying the gesture was the fulfilment of the governor’s promise to engage Ekiti youths productively.

Olauyi urged the officers to see the sustenance of the system that elevated them as a goal that must not be allowed to fail, in order to grow the local government administration for better performance and personal fulfilment.