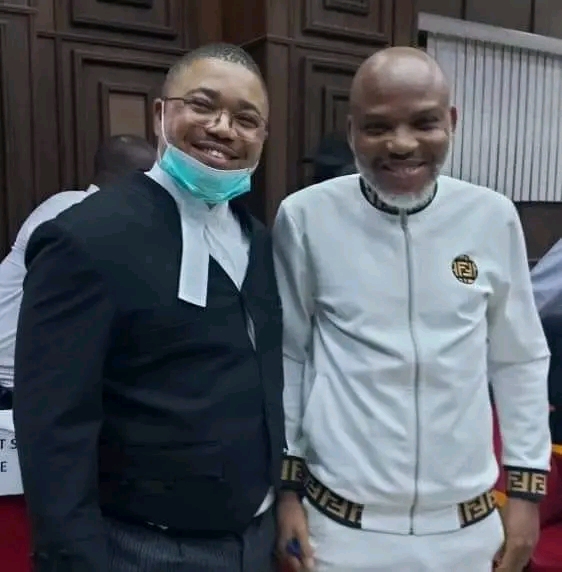 Justice Binta Nyako of the Federal High Court sitting in Abuja has denied the bail application of the leader of the Indigenous People of Biafra (IPOB), Nnamdi Kanu.

She added that Kanu breached his former bail conditions, and until that is heard, his present bail application is immature.

Ahead of the ruling on the bail application, on Wednesday morning, the Federal Government had filed a six-count amended charge against Kanu.

According to her, the prosecution cannot dump the new amended charge on the court, on the morning of the hearing.

Various Setbacks
On dismissing his bail application, the court noted that Kanu’s trial had since 2015, suffered various setbacks owing to over 19 interlocutory applications that have been filed in the matter.

It, therefore, implored the parties to allow the case to proceed to trial to enable the charge to be determined.

Kanu had been arraigned in an Abuja Magistrate Court for the first time for charges of “criminal conspiracy, intimidation and membership of an illegal organisation” by Nigeria’s Department of State Services (DSS).

The charges violated “Section 97, 97B and 397” of Nigeria’s penal code. with Chief Magistrate S. Usman berating the Department of State Services (DSS) for failure to produce Kanu in court on the two consecutive times the matter came up before the court.

Kanu’s supporters stormed Abuja in luxury buses in a peaceful protest against their leader who was arraigned by the Federal Government before the Wuse Zone 2 Magistrate Court, Abuja on 23 November 2015.