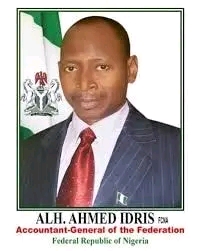 Facts have emerged showing why embattled Accountant General of the Federation who is currently a guest of the Economic and Financial Crimes Commission (EFCC) stayed in office after he served out his term as AGF and also attained the retirement age of 60 years.

According to a source, “he retired from service in 2021 as a civil servant but was reappointed as a political appointee”.

An official at the Office of the Accountant General of the Federation (OAGF) confirmed that Ahmed Idris’ reappointment letter was signed by the Secretary to the Government of the Federation (SGF) thus making him a political appointee.

The official stated the letter reappointing Ahmed Idris as AGF had the blessing of President Muhammadu Buhari.

An Accountant General of the Federation (AGF) is usually appointed to the position from the ranks of Directors of Finance and Administration after successfully scaling three examinations ICT, Civil Service Procedures and General Knowledge.

Ahmed Idris is considered to be the first to transition from a civil service AGF to a political appointee. (The Nation)