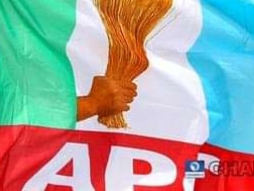 Abdullahi Adamu, the National Chairman of the All Progressives Congress (APC) has said only God would determine the party’s presidential candidate for the 2023 elections.

The former Nasarawa State Governor said party members have the right to aspire for APC ticket, but only God would decide the winner.

Adamu spoke during an interview with Voice of America, Hausa Service.

He also noted that the APC national leadership will follow laid down guidelines in deciding the party’s presidential candidate from the 28 presidential aspirants.

“It is God that decides who gets what. Once God makes up his mind and says this is who He wants, that is what we are praying for. We have 28 aspirants for the presidential ticket and everybody knows that all of them cannot get the ticket.

“If it’s God’s wish, they all can even be president of the country one after the other. Ours is to ensure justice in the choice of who emerges as the candidate of the party. That does not mean we are perfect. But we pray we do the right thing.”

APC has the likes of Bola Tinubu, National Leader of the party; Rotimi Amaechi, former Transportation Minister; Nwajiuba, former Minister of State for Education, Dave Umahi, Governor of Ebonyi State among others, as presidential aspirants.