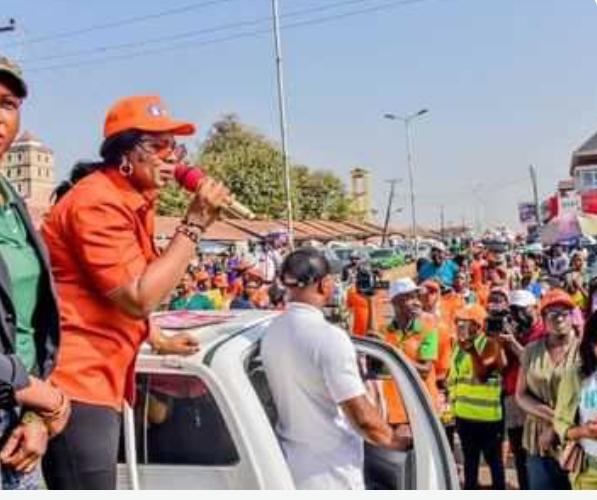 As one of the ways of ending Gender Based Violence (GBV), which she described as hydra-headed problem, the wife of the Ekiti State Governor, Dr Olayemi Oyebanji has said that the state would establish and equip the gender courts in Ekiti.

Olayemi said that the GBV required multidimensional solution that would involve mulit-sectoral approach, adding that, the government would look inwards into the already existing structures in the state so as to accommodate new challenges.

The wife of the governor stated this in an interactive session with the newsmen in Ado-Ekiti, as parts of activities marking the year 2022 edition of the 16 days of activism of no violence against women and children.

She said: “We will ensure that we gazette all our public policy laws and also review some of our laws to include, whistle blowers and witness of sexual violence crime protection, mandatory reporting, among others.”

Dr Oyebanji expressed gratitude to the state governor, Mr Abiodun Oyebanji for creating an enabling environment and support in ensuring that the global event is observed in Ekiti state.

“He has shown himself not only as a leader but also as a person who has passion for the development of women in Ekiti state as we commemorate the 16 days of activism.”

As parts of the programmes lined to mark the global event, she said that stakeholders including the MDAs, civil society organisations, and the gender and vulnerable person’s unit of her office have designed a lot of activities.

“Some of the activities include but not limited to sensitisation of key and relevant stakeholders on GBV, media engagement; awareness creation across the state and community dialogue sessions.

“There will be school outreach programmes and a mega rally where Ekiti women from across the 16 local governments and 19 local governments development areas will join me, her Excellency the Deputy Governor and the Secretary to the State Government in an awareness rally in Ado-Ekiti on Wednesday 30th November.”